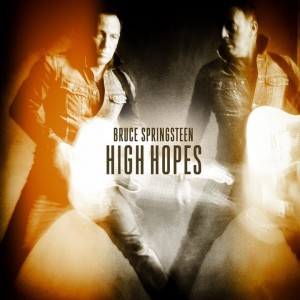 Bruce Springsteen’s new album ‘High Hopes’ has been set for January 17 release on Columbia Records.  ‘High Hopes’ finds Springsteen in a number of different musical settings, and includes the members of the E Street Band as well as guitarist Tom Morello and many additional players. The album was recorded in New Jersey, Los Angeles, Atlanta, Australia and New York City and marks Springsteen’s 18th studio album.

The ‘High Hopes’ album packaging includes Springsteen’s own liner notes that detail the album’s evolution (full text of the liner notes is below).

Morello joined Springsteen and the E Street Band on tour in Australia in March, 2013 (sitting in for Steve Van Zandt), and became, as Springsteen says, “my muse, pushing the rest of this project to another level.”  Besides his guitar playing on the album, Morello also duets with Springsteen on “The Ghost of Tom Joad.”  Clarence Clemons, who passed away in 2011, and Danny Federici, who passed away in 2008, also appear on several songs of what Springsteen calls “some of our best unreleased material from the past decade.”

Here’s a link to the song and video for “High Hopes.” The video, directed by Thom Zimny, is a collage featuring photos from Danny Clinch, Australian tour footage shot by Chris Hilson and featuring Tom Morello, vintage documentary footage, text and graphics: http://brucespringsteen.net/

All songs written by Bruce Springsteen except as noted

I was working on a record of some of our best unreleased material from the past decade when Tom Morello (sitting in for Steve during the Australian leg of our tour) suggested we ought to add “High Hopes” to our live set.  I had cut “High Hopes,” a song by Tim Scott McConnell of the LA based Havalinas, in the 90’s.  We worked it up in our Aussie rehearsals and Tom then proceeded to burn the house down with it.  We re-cut it mid tour at Studios 301 in Sydney along with “Just Like Fire Would,” a song from one of my favorite early Australian punk bands, The Saints (check out “I’m Stranded”).  Tom and his guitar became my muse, pushing the rest of this project to another level.  Thanks for the inspiration Tom.

Some of these songs, “American Skin” and “Ghost of Tom Joad,” you’ll be familiar with from our live versions.  I felt they were among the best of my writing and deserved a proper studio recording.  “The Wall” is something I’d played on stage a few times and remains very close to my heart.  The title and idea were Joe Grushecky’s, then the song appeared after Patti and I made a visit to the Vietnam Veterans Memorial in Washington.  It was inspired by my memories of Walter Cichon.  Walter was one of the great early Jersey Shore rockers, who along with his brother Ray (one of my early guitar mentors) led the “Motifs”.  The Motifs were a local rock band who were always a head above everybody else.  Raw, sexy and rebellious, they were the heroes you aspired to be.  But these were heroes you could touch, speak to, and go to with your musical inquiries.  Cool, but always accessible, they were an inspiration to me, and many young working musicians in 1960’s central New Jersey.   Though my character in “The Wall” is a Marine, Walter was actually in the Army, A Company, 3rd Battalion, 8th Infantry.  He was the first person I ever stood in the presence of who was filled with the mystique of the true rock star.  Walter went missing in action in Vietnam in March 1968.  He still performs somewhat regularly in my mind, the way he stood, dressed, held the tambourine, the casual cool, the freeness. The man who by his attitude, his walk said “you can defy all this, all of what’s here, all of what you’ve been taught, taught to fear, to love and you’ll still be alright.”  His was a terrible loss to us, his loved ones and the local music scene.  I still miss him.

This is music I always felt needed to be released.  From the gangsters of “Harry’s Place,” the ill-prepared roomies on “Frankie Fell In Love” (shades of Steve and I bumming together in our Asbury Park apartment) the travelers in the wasteland of “Hunter Of Invisible Game,” to the soldier and his visiting friend in “The Wall”, I felt they all deserved a home and a hearing.  Hope you enjoy it.