Behemoth Announces New Video And Single Off The Satanist! 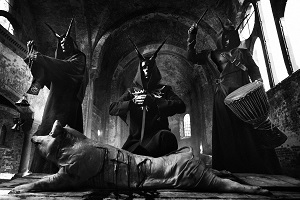 Polish metal titans Behemoth have inked a deal with EVP Recordings to release their new album The Satanist in 2014. The band will premiere the first of their new unholy incantations to their disciples to worship them digitally in Australia on December 4

The album was produced by Behemoth, Wojtek and Slawek Wieslawscy and Daniel Bergstrand in Hertz Studio. “The Satanist” was mixed by Matt Hyde (Slayer) and mastered by Ted Jensen (Metallica, AC/DC) at Sterling Sound.

The cover art, which will also be revealed on December 4, is a painting by renowned Russian painter and occultist, Denis Forkas. For the cover, Nergal’s own blood was included in the paint. Additional artwork was handled by Metastazis and Zbigniew Bielak.

The Grupa 13 produced video for “Blow Your Trumpets Gabriel” will also be released on December 4th. The teaser for the video can be seen  HERE