Hot off the success of their first studio album release in 20 years, This Is Not The End, and its Top 20 ARIA Album Chart debut, iconic Aussie rockers Baby Animals are thrilled to announce a string of new Australian tour dates in 2014 – a continuation of this year’s national capital city tour.

Presented by Social Family Records, The Harbour Agency and MAX, “Feed The Birds Part II” will kick off with two “A Day On The Green” shows with Jimmy Barnes in Clare Valley, South Australia and Yarra Valley, Victoria; followed by headline dates in Merimbula, Wollongong, Coffs Harbour, Laurieton, North Brisbane, Gold Coast, Albury, Batemans Bay, Rooty Hill, Revesby, Ipswich, East Brisbane, Dee Why and Belmont.
Tickets are now on sale today from www.thebabyanimals.com and via the links listed below.
“Feed the Birds” is a landmark event for the Baby Animals. Their sold out show at The Metro Theatre in Sydney was filmed for the band’s first ever live DVD, Feed the Birds (Live). Fans can purchase a signed copy of the DVD, or grab a limited release bundle that includes a ticket to a private cinema screening of the concert in Melbourne, also available from www.thebabyanimals.com.
Fronted by Suzie DeMarchi, Baby Animals strike a familiar pose with guitarist Dave Leslie returning for action, Dario Bortolin on bass and Mick Skelton on drums. The “Feed The Birds” tour named after the infamous Baby Animals tradition of pouring red wine into the mouth of fans in the front row – from Suzie’s own!
“Feeding the birds? It’s just us giving something back!” says Suzie DeMarchi.
“We had so much fun on part one of this tour, so we cannot wait to bring to show to our fans who live outside the big cities,” says Suzie.
Since exploding onto the scene in 1991 with the release of their first single, Early Warning, Baby Animals have become one of Australia’s most successful rock outfits. Their eponymous album spent six weeks at No. 1 in Australia, going eight times platinum and becoming the highest-selling debut Australian rock album until the release of Jet’s album 12 years later. The band toured internationally and struck up friendships with music legends Van Halen, Robert Plant, Paul Rodgers, and Bryan Adams.
This Is Not The End, the band’s first full-length release since 1993, marked a return to the charts. It made its debut at number 19 on the ARIA Album Chart and number three on the Australian Album Chart when released last month.
Tickets for the “Feed The Birds – PART II” tour, exclusive fan bundles and copies of This Is Not The End and Feed the Birds (Live) DVD are available from www.thebabyanimals.com.
This Is Not The End is also available now from iTunes. 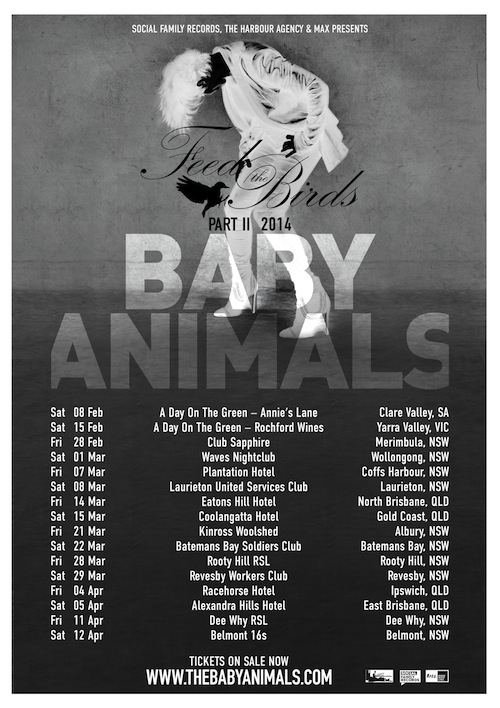 A Day On The Green Shows w/ Jimmy Barnes: