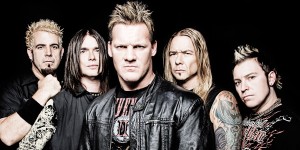 “After playing Soundwave 2013, one of the best tours of our career, in front of the best Fozzy fans in the world, we had one mission on our minds- to come back to Australia on the Sin And Bones tour ONE MORE TIME! Now we have accomplished that mission and are stoked to be coming back to Oz in December to tear your heads off once again! Along with our bros in Steel Panther and Buck Cherry, we are forming a Rock n Roll TRIPLE THREAT that can’t be missed!! This is the tour of the Summer and we can’t wait to kick all your asses again!” – Chris Jericho

STEEL PANTHER TO INFECT AUSTRALIA ON THE SPREADING THE DISEASE (S.T.D.) TOUR