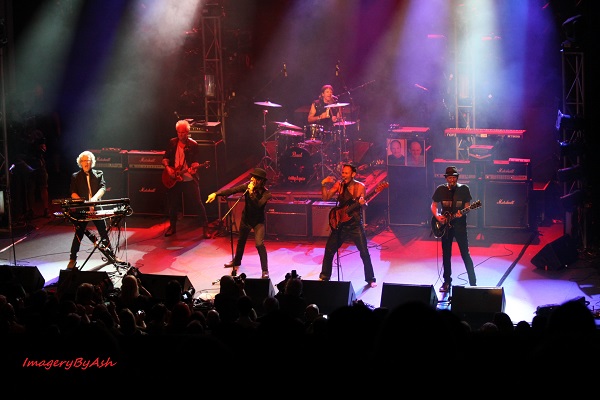 “It’s amazing because they said once upon a time that live music had died, actually what it seems like is that live music has lasted and there’s a few generations out there appealing to different crowds at the moment which is fantastic. It’s amazing the resurgence, people come out and the crowds are there and it’s really good for music.”

From release: If you were a kid growing up during the late ‘70s early ‘80s, chances are you would have heard Mi-Sex hits, year after year. Who can forget their crowning glory, Computer Games? By the late 1980s having disbanded and then being hit with the tragic death of front man, Steve Gilpin in 1992, Mi-Sex seemed destined to remain a memory and nothing more. Fast forward to 2013 and Mi-Sex are playing select live shows with new front man and vocalist, Noiseworks songwriter/bass player Steve Balbi.

You were out playing some shows in May, but why was this November the right time to go back out and play some shows again?
Just what everyone was doing individually at different times, it just ended up being the best time for us to get back together and get back and do some more gigs.

And the last ones in May went well?
Yeah it was really good, we really enjoyed ourselves and  the crowd seemed to enjoy themselves, it was good, it just made us want to play some more.

How has having Steve Balbi out the front on vocals given the band a new energy?
Well obviously differently from our original singer Steve Gilpin but Steve’s great, he brings a great voice, great on stage personality and a really nice guy and a great energy to the band.

After a couple of years with him out front, have the crowds warmed to him singing these songs?
Yeah I think so, I think people are happy to hear the body of work that the band did, and you know Steve interprets it really well and we seem to get a good reaction.

So talk us through a Mi-Sex show these days, how do you put together a set? Is it all killer, no filler?
Well there’s actually a lot of songs that did pretty well, there’s a bunch of basically singles, but we’re always trying to change it and just keep it a little bit different so there’s always some songs that come in and out a little bit and there’s definitely a core songs that we do but the running order is always an interesting part of doing the gigs.

Do you have a favourite song to perform live?
I really enjoy ‘Falling In and Out’. Just the whole thing, we’re quite enjoying doing it and we still seem to have a bit of a spark when we get together and there is a bit of energy there, and what Steve Balbi and Travis New the other guitar player bring makes for a really enjoyable experience for us all and great to see people enjoying it and getting off on the songs.

What is it that you still enjoy about being a part of Mi-Sex?
The songs, and just playing with the people as musicians and it’s fun to be playing and fun to have people that are into it. It’s just been fun to play again, you’re a musician it’s like it’s good to do it.

The big question is, is there a chance we could one day hear new music from Mi-Sex?
Well we’re working on a few ideas, whether it comes out in the near future remains to be seen at the moment, but hope this brings a turn and we’re positive about playing and moving forward with what we’re doing.

The great thing at the moment is the almost resurgence of bands such as Mi-Sex and others from the 70’s and 80’s that are out there playing again and it’s awesome to see…
Yeah well it’s amazing because they said once upon a time that live music had died, actually what it seems like is that live music has lasted and there’s a few generations out there appealing to different crowds at the moment which is fantastic. It’s amazing the resurgence, people come out and the crowds are there and it’s really good for music.

It’s been over 20 years now since Steve’s passing, what’s your best memory of those good old days?
For me, just a lot of the gigs and the energy and the camaraderie between everyone, we had a lot of great gigs and it was really good. There were a whole lot of things, but playing live was the main thing, the best thing and the most memorable part of it.

Was there ever a time when you thought Mi-Sex would never see the light of day again?
Yeah probably for about the last twenty years *laughs* basically when Steve went there was never a thought to keep the band going, but as its turned out we have sort of got it going again and we’re really enjoying it and hopefully we can do it for a little bit longer yet.

What was the catalyst behind getting back together with a new singer?
It was basically the bass player Don had been working at a place for a long time and he was having a going away party and they said ‘what would you like to do?’ and he said it’d be great if I could get my old band back together again, and it just happened that Steve Balbi had expressed a bit of an interest in it, and he came and did and we got a real vibe from doing it and basically that was the catalyst for doing it. It was great to do the songs again and it was a lot of fun as well.

Did you have to relearn them?
Oh yeah absolutely. I mean some of them were easier than others, put it that way. Sometimes you’ve got to go back and listen to the record and make sure you’re doing it the right way. *laughs*

So, I have to ask, as corny as it is, do you have a favourite computer game?
Yeah probably ‘Battlefield 3’ at the moment. *laughs*

What keeps you busy these days when you’re not playing gigs?
Just making music in different ways, Don and me have just been on holidays overseas for six weeks, and Murray’s been away and we’ve all been out doing bits and pieces.

What does the future hold for Mi-Sex?
Well we’re just taking it as it comes at the moment, but when we get together we’re really enjoying playing and the music still has a bit of power about it and people seem to respond to it and we’re definitely not overdoing it with the amount of gigs we’re doing at the moment, but we’re hoping to do more early next year. That’s probably what the future holds, more gigs, we’re happy to get out there and have the chance to play again after such a long time. We’re hoping for other parts of country Melbourne and Brisbane early in the new year.