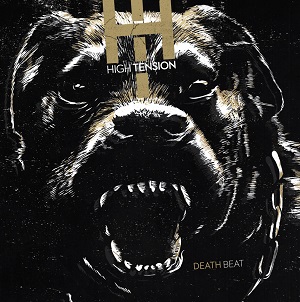 In early 2012 – almost out of nowhere – a music video landed on the internets and furiously peddled its way around social media, with the speed of a Lolcats meme circa 2010. ‘High Risk, High Rewards’ was an unexpected uppercut straight outta leftfield. The riffage was demonic, demanding and frankly, hooky as shit. The vocals? Gloriously guttural, “like a circular saw made out of inverted crosses” (Hysteria Magazine). ‘Beautifully brutal’  Inpress Magazine agreed.

High Risk, High Rewards demanded attention, respect and an instant Triple J add. With one song, Melbourne’s High Tension revealed themselves to be a powerful new force in Australian music.
Rising from the ashes of treasured disco-punks Young & Restless, Karina Utomo (Vocals) and Ash Pegram (Guitar) recruited the bottom section of Melbourne dark rock stalwarts The Nation Blue (via bassist Matt Weston) and Love Like Electrocution’s Damian Coward, and made some beautiful noise together. Their crushing 7” vinyl release even prompted The Vine to suggest that the band were “killer now, but undoubtedly the best band of 2014.”
A series of interstate live forays with Karnivool and Lo! proved what their pedigree had already implied: High Tension had live chops. Karina’s imposing presence and banshee scream, anchored by the slicing riffage of Ash Pegram’s guitar and the throbbing rhythm section is truly something to behold. They invoke the same frenzied response generated by heroes like Hot Snakes, The Bronx and Kvelertak.

Death Beat is hot shit. The tits. The aural equivalent of being snap kicked in the dick. Cooking Vinyl Australia will unleash it on October 25.   – Don’t say you weren’t warned.