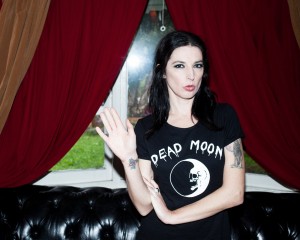 Adalita recently revealed the release date for her second solo album, All Day Venus – this coming September 20.  Now, further good news is at hand for fans of the Melbourne artist.  Following the album’s release, Adalita will hit the road for a headline tour.

The tour will take Adalita to major metro and regional locations along Australia’s east coast.  It will provide the first opportunity for fans to see Adalita playing her new material with a full band.  The band line-up includes ex Paradise Motel bassist Matt Bailey. In addition to the east coast tour dates, Adalita will also perform a solo show in Adelaide.

Adalita is delighted about getting back on the road. “I can’t wait to tour. It’s all I think about, it’s all I want to do, I’m so hungry for it and I want to share that with the people that I bring on board for this band. I want to create a little universe that people can enter and really get involved in…I feel like it’s going to be a real trip and an intense communion, both band wise and audience wise. Whatever shape it all takes and however it ends up sounding is completely open to the next few weeks of rehearsals and I definitely feel like I want to have a really good time with this album and just have fun.”

Said album, All Day Venus, was recorded with acclaimed local producer Lindsay Gravina. Featuring twelve fresh songs, including the album’s title track ‘All Day Venus’ and the current single ‘Warm Like You’, the album was borne from periods of intense creativity and personal reflection; the songs dark, brooding and unflinchingly honest, bursting with energy.

Live, the album is likely to take on a life of its own.  As Adalita intimates, “I’ve never had a band on my solo project so it’s all completely new to me and really I’m just gonna be winging it from here on in. Of course I’d like to emulate the album and stick pretty close to it but I hope it ends up sounding raw and pretty loud, with the always mystical additional factor of playing live. You kind of have to tend to make things a bit larger than life live so I want to match that feeling with what myself and the band come up with.”

Opening for Adalita on the tour will be indie songstress, Laura Jean – her charming folk tunes being the perfect accompaniment to Adalita’s music.  Tickets for the All Day Venus tour go on-sale next Monday September 2.  For details, head to www.adalita.com.

Adalita’s self-titled solo debut won critical acclaim upon release, ultimately scooping the coveted AIR Award that year for Best Independent Album.  All Day Venus is a vastly different offering, but one that is sure to similarly impress.  It’s out September 20.

ALL DAY VENUS IS OUT SEPTEMBER 20 THROUGH LIBERATION