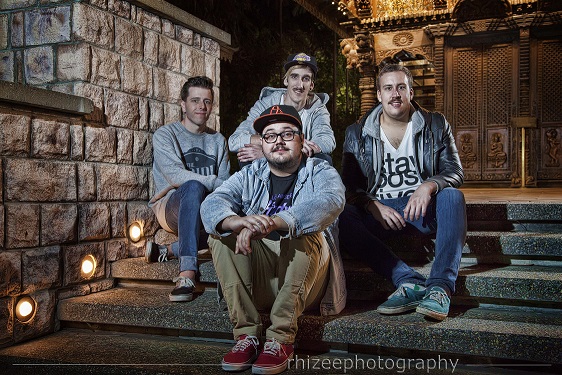 Bio: Sunsets are a Brisbane based pop-punk band that formed in the end of 2010 with one goal; to have FUN and to play FUN music!

Sunsets continue to bring their own take on the “easycore” genre to Brisbane, playing heavy mosh parts, with catchy sing along choruses and huge group singing parts. This has given them the amazing opportunity to support bands from both hardcore and pop-punk genres, including local and international acts such as: The Story So Far, Man Overboard, Confession, Silverstein, Tonight Alive, Dream On Dreamer, The Bride, Rufio, The Swellers, House Vs Hurricane, Thy Art Is Murder, Heroes For Hire, and I Call Fives just to name a few!

Their new EP “Make It Happen” is available online and in stores now. The first single taken from the new EP “Elsewhere Bound” has already received a great reception upon its release a few months before the official release. The band is now hard at work planning to tour their new EP all over Australia throughout 2013. Get stoked!

We dug their style and sound and thus proclaim Sunsets one of our Best Things You’ve Never Heard so we had drummer Andrew answer some questions for us.

Let’s start with the basics; can you please give us the abridged version of the story of how Sunsets came to be and where the name came from?
Sunsets formed in late 2010 with the idea of playing fun and energetic music. We wanted to play something different from what the majority of local Brisbane bands we went and saw every weekend were doing. Matt and myself met through our music degree at uni, and the other guys had been in different bands we had been in and played shows with before. The name was thought up by our guitarist Matt, and we basically just wanted a fun and easy name, something people would remember.

Can you now please introduce each other and give us a rock ‘n’ roll fact or myth about each of you?
I’m the drummer Andrew and mine would be that I played in a metal band in high school that got a house party shut down by the cops. Matt is our guitarist and he once punk jumped so high that he exited the Earth’s atmosphere, and only NASA know the true details. Casey is our vocalist/melter of hearts and no one really knows where he came from, but I guess we’re stuck with him now so yeah. Julian is our newest member and the first show he played with us he sold more merch than we have ever sold at a single show before.

Being a band for only a few years, in that time what have you learned about being in this band that you thought was easy but has in fact been the exact opposite?
Time management. Everyone has their commitments outside the band like uni, work, family, etc. We work pretty hard and do well as far as time management goes but once you start touring more it can be really hard when members are travelling or unexpected things pop up and you have to cancel practices or shows. Anyone who tells you being in a band is easy probably lied, but it’s so worth it!

Can you give us four words that you feel sum up the sound of the band perfectly?
Fun, catchy, energetic, vibe

So you’re in an elevator and you have a mere twenty seconds to try and convince the other person in the lift to listen to your music, what do you say to them?
Ask them to name all their favourite artists, and then tell them we sound exactly like that, how could they resist? Then I’d offer them a copy of our cd for free, no one can pass up free stuff

You’ve released your EP ‘Make It Happen’ in January, with only having your previous EP from 2011, what had you learned in those two years that allowed you to make this new EP what it is?
In those two years we went through a few/a lot of member changes, so any downtime we had between touring and playing hometown shows we put into practicing and finalizing the lineup of the band to what it is now. Because of this we didn’t have much time for anything else, but taking the time and finding band members that you gel with has been our biggest lesson. You have to all get along, especially when you have to cram into a tiny smelly van with them for 12 hours between shows on tour. We live together at the moment and get along really well. The new dynamic that came with new faces in the band made the writing process for this EP so much easier.

I have to say that you busted out a key change in ‘Elsewhere Bound’ and won me over straight away, as the lead single, why was that the best choice from the EP (besides the use of the awesome key change)?
Haha why thank you! Elsewhere Bound was the first song Matt and I wrote by ourselves and was so catchy and fun to play, we couldn’t not choose it as the single for the EP. We all wanted a key change on the EP and hadn’t decided what song to put it in until last minute before recording when it was added in. Our writing style has always been to show off our varying influences across the songs we put out, and Elsewhere was the best all round song on the EP hands down.

Do you have plans for a full length album in the near future?
Yes we do! We already have around 10 new songs written and plan on heading into the studio soon to record a few of them. From there we plan to book studio time for a full length shortly after the new tracks are released.

In terms of your song writing, what do you consider to be the most important ingredients that make up a song by Sunsets?
We write the majority of the guitar and drum parts first to get the structure of the song, then second guitar parts add the next layer, finally vocals and bass parts are added. Basically a Sunsets song has to have catchy guitar riffs, fast and heavy drum parts, lyrics about girls, and hooky vocal melodies. Bass can really play whatever they want.

Both lyrically and musically, what or who inspires/influences your music the most?
If you’ve ever watched either of the Parkway Drive DVDs, you’ll see how much bands of that calibre inspire younger bands like ourselves to tour constantly and to chase our dreams every day. One of the many bands that inspire us to play music that makes us happy would be The Wonder Years. To this day they are still one of the best pop-punk bands around!

Touring wise, you’re heading to Sydney to play some shows, what can people expect of they come and see you live?
These Sydney shows are going to be really fun! We will probably all be dressed up as something really stupid/hilarious and jumping all over the place off anything we can find. We are going to be playing a heap of new songs from the EP and it is Julian’s first tour with us so anyone who comes and hangs out I can promise will have an absolute ball!

You’ve had the opportunity to open for a number of big bands, did you get the chance to watch them all and adapt some of what they have done to bring to your performances?
Yeah we definitely have! We have been lucky enough to play with some amazing bands who have inspired us, and some of which we have become close friends with. I’d have to give a special mention to our friends in The Bride & Heroes For Hire who have helped us out heaps and given us plenty of stage moves to learn.

For a bit of fun, say you get the chance to open for any artist in the world that you haven’t already, who would they be and why?
Limp Bizkit and if you can think of a reason why not, let me know.

Lastly, here’s a chance to gaze into your magic mirror. In the next year, Sunsets will:
1. Tour a whole lot more
2. Record a heap of new songs|
3. Buy you a beer