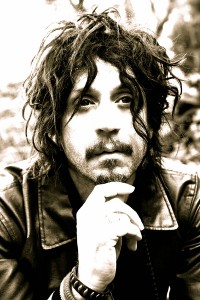 Steve Balbi has lived a remarkable life. His is the sort of story that sells books, and shifts movie tickets. It’s a tale of incredible highs and rare lows, a rock ‘n’ roll reality with all the trappings that come with being a familiar face from one of Australia’s biggest bands of the late ‘80s and early ‘90s. It’s a tale of excess. Of reinvention. Of surviving, and thriving.

Steve Balbi has walked the line. And his story is now being told in Balbi’s own way – through music. The former Noiseworks, Electric Hippies and Rose Tattoo bass player and guitarist has released his first solo album, “Black Rainbow.” It’s a work that reflects on where he’s come from, and where he’s going.

Why did it take Balbi so long to go it alone musically? “The easy answer to that and probably the untruthful one is that I always saw myself as a band guy. The real truth to that is fear. Fear of standing alone. Fear of failure. If a band didn’t work, or didn’t make a good recording, there were always other elements (to blame). This record and what I do now, if it’s no good, it’s (down to) me. I’ve learned that the real joys I get these days is from taking risks.”

There was a time when Balbi took risks of a different kind. Like many other high-profile artists, Balbi has battled with alcohol and substance abuse. But unlike many of his peers, he overcame what he describes as a “personal disease.” Balbi has now been abstinent for 14 years – and counting.

“What I learned was that I’m not as great as I thought I was, and I’m not as bad as I thought I was. I’ve learned that my ego is really destructive and I try to keep that out of my life as much as possible. It’s made music a real blessing. I was one that couldn’t take compliments but I find I can take compliments now. Because I really believe music is a gift and it was given to me to share with people. I don’t know what I believe in. I’m an ego maniac with an inferiority complex and there’s a way of living with that, and that’s just humility.”

Balbi has created something beautiful, with a hint of darkness. “Black Rainbow” has an overarching sense of optimism. It’s a sincere set of works, with a touch of “epic.” What could lie at the end of Balbi’s dark rainbow? Black gold, perhaps? “No. It’s gold, absolute gold,” he laughs. “Adversity can be the greatest teacher, as long as you don’t give up. In a way what this record is doing, it’s summarizing my past and bringing me right up until now, so I can move on in a forward direction.”

The album also carries a handful of songs written in recent years with Balbi’s former band, Move Trees. And there’s a reworked version of “Touch,” a top 5 hit for Noiseworks back in 1988.

“People always turn up to my gigs and tell me to play a Noiseworks song. For so long I wanted nothing to do with it,” he explains. Balbi finally relented and began introducing a different version of “Touch” into his playlist — and it resonated with his fans. “The song has never really felt like it said it properly,” he admits.

There was a time when Balbi had shunned the mainstream pop-rock brand that Noiseworks had become.  Noiseworks, with its clean-cut looks and big radio-friendly sounds, became the antithesis of where Balbi was headed. The bass player left the group with fellow Noiseworks bandmate Justin Stanley, he formed the Electric Hippies project in the early 1990s. It was a creative revolt. “The freedom of jumping off that,” says Balbi, “it was really liberating.” With the Electric Hippies, he recalls, “we glammed-up and put on some mirrorball suits and recorded the smallest guitar sounds. It was just so liberating to feel like we were making art again. We were doing what we really always set out to do. To connect with people via music, rather than just be successful.”

A life-long musician, Balbi has found a new sort of liberation. His solo album is self-produced. And he’s taken it through the independent route, with Social Family Records. He’s at ease with his place as a popular, elder statesman of Australia’s music scene.

These days Balbi runs a studio in Sydney, and he’s made a full-time career as a producer. He’s still happy to talk about his Noiseworks days. But he’s always looking forward. “I fought this thing. But I’m still that guy from Noiseworks. It really doesn’t matter,” he says with a laugh.

Balbi is keen to hit the road in support of “Black Rainbow.” There’s a national tour with Baby Animals later this year, and a raft of as-yet-unannounced shows to come.

“I don’t want to be a rock star. That’s not what I’m about,” he says. “I just want to make great music. I just want to keep touching people,” he says. “I do believe I can do that. It’s something more special to me when I’m playing to a room of 20 people and you can see people cry. I love that. That’s what I want to do.”

Remarkably, Balbi has ideas for a follow-up album. After so many years as a band-man, Balbi has really found his feet as a solo artist. The fear of going it alone has evaporated. “I’ve had a lot of adversity in the past decade and a half. And I fear nothing now. I’ve climbed my mountain, I’ve fought my war. And I really just landed thinking, there’s no point in making music without taking risks and without the possibility of failure.”

Catch Steve Balbi on the Baby Animals ‘Feed The Birds’ Tour at the following dates: