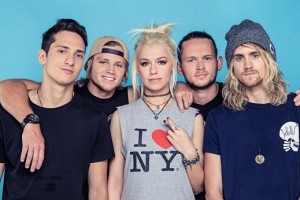 TONIGHT ALIVE TO RELEASE NEW ALBUM THE OTHER SIDE ON SEPTEMBER 6TH NEW SINGLE ‘THE OCEAN’ AVAILABLE FOR FREE NOW!

Sony Music Entertainment Australia is excited to announce that TONIGHT ALIVE’s highly anticipated new album, THE OTHER SIDE, will be available from September 6th. The first single to be taken from the upcoming album is the edgy yet refined ‘The Ocean’, which is now available to download for free from the band’s official website.

After recording their 2011 debut album What Are You So Scared Of? in Los Angeles with Mark Trombino,  Australian pop-punk icons, TONIGHT ALIVE, decided to make their sophomore album closer to home. After finding a stunning remote house near Coffs Harbour, NSW, on a property surrounded by acres of forest, they took it over and reinvented it as their own epic recording studio. They were joined in by long time collaborator, Dave Petrovic, and combined forces to create the masterpiece that is THE OTHER SIDE, which was then mixed by Dan Korneff (Pierce The Veil, Paramore, Sleeping With Sirens).

“THE OTHER SIDE is a record we feel so proud of,” explains TONIGHT ALIVE front woman, Jenna McDougall. “The writing process spanned over two years and involved constant touring and amazing experiences, so it covers a lot of ground. We feel like the album as a whole represents us not only as a band but also as individual musicians, and we can’t wait for our fans to hear the new TONIGHT ALIVE.”

The first taste of the upcoming album is the track ‘The Ocean’, which premiered on Radio 1 in the UK last week to an overwhelmingly positive response.  The track shows a tougher and more sophisticated approach than their 2011 debut and is a promising insight to what is to come from THE OTHER SIDE.  “Releasing ‘The Ocean’ feels like a new beginning,” explains Jenna. “It’s a song with a lot of passion and emotional drive behind it and playing it live really brings out that intense inner meaning!”

As well as their unique sound and undeniable appeal, their vast social media base really sets TONIGHT ALIVE apart. Their combined Twitter following of over 260K and Facebook community in excess of 170K demonstrates the immense support that their fans have for the band, both here and around the world. To satisfy their dedicated international fans, THE OTHER SIDE will also be released in Japan, Asia, New Zealand and the UK, as well as in the US and Canada through Fearless Records.

Since their debut release, TONIGHT ALIVE has relentlessly toured the world including Europe, Asia, Japan, the US and the UK. In 2012 alone, the band played to in excess of a quarter of a million fans that included wowed crowds on the US Vans Warped Tour and the Kerrang! Tour in the UK. TONIGHT ALIVE are currently touring the US as part of the 2013 Vans Warped Tour, and plan to tour Australia again later this year to introduce fans to the depth and intense live experience of THE OTHER SIDE.

TONIGHT ALIVE is Jenna McDougall (vocals), Whakaio Taahi (guitar), Cameron Adler (bass guitar), Jake Hardy (rhythm guitar) & Matt Best (drums). Their new album THE OTHER SIDE will be released on September 6th, and the first single ‘The Ocean’ is available to download for free now via the official TONIGHT ALIVE website.