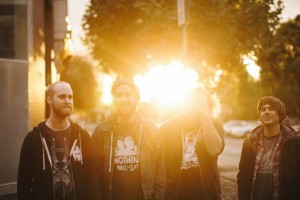 Melbourne’s The Smith Street Band have revealed that their recently announced Australian Tour will be in support of a brand new five track EP/10” vinyl release via Poison City Records. Titled ‘Don’t Fuck With Our Dreams’, it’ll be out August 9

Pre-orders are available from Tuesday June 18 – those who pre-order on that day will go into the draw to win one of 50 tickets to an EP launch party that the band and friends will be playing at! Party is in Melbourne on Friday August 9. Pre-orders will be available via poisoncityrecords.com

The Smith Street Band inadvertently stumbled into the spotlight last year with their “perversely catchy” second album ‘Sunshine & Technology’, which prompted an outrageously warm response from fans both old and new. The four-piece toured relentlessly – racking up more than enough stories to fuel a thousand albums – before hibernating at Melbourne’s Sing Sing South studios with Matt Voigt (The Dirty Three, Paul Kelly, The Nation Blue) for the recording of this heavily anticipated release, which is in a way a snapshot; a volume that explores a period of time between one album and the next. Singer Wil Wagner explains the events leading up to the EP recording and the invigorated perspective that inspired in the band:

“At the start of 2013 we went on tour with our best friends Bomb The Music Industry and The Bennies. It was the longest Australian tour we had ever done and by far the most eventful. A lot happened in that month and a bit that we spent on the road, but the thing we all took away from it was a sense that we had been galvanised and strengthened as a group, not just within our own bands but the entire touring party, and that we were hungrier than we had ever been. This EP is about that time, all the songs were written during or just before that tour.

“The thing that sticks out from the tour was an incident where Jules from The Bennies was seriously injured by an aggressive guy who’d just shown up at one of the shows. It was so shocking to us and something that we had never experienced, let alone expected at one of our shows. In the aftermath we really questioned what we were doing, what difference (if any) we were making and if there’s anything we could have done to have stopped the awful incident, or to stop things of that nature happening in the future. There were vans pulled over, shows cancelled and then reorganised and moments where we all wanted to give up on music. But in direct juxtaposition to this were some of the most inspiring acts of human kindness and friendship I have ever witnessed, and that is the overarching theme of this EP. ‘Don’t fuck with our dreams’ is something Jules said during the incident, and that kind of became a motto for the rest of the tour. It isn’t about us as individuals or even us as bands, we want to make a positive change in the world and we want to create the happiest, best party environments for our shows and we are not going to let the dickheads win!

“We recorded the vast majority of this EP live with the legendary and INCREDIBLY patient Matt Voigt. It was the first time we’d ever tried recording that way and it was great having everyone in the same room, playing off each other. It felt almost like we were playing a show and we really wanted to capture that energy. We had a lot of help from a lot of people on this recording but my favourite moment was having all our friends who were part of that tour come down to sing back-ups on ‘Don’t Fuck With Our Dreams’. I wrote that part with that in mind, but all of us there singing in the same room felt so good and like we were salvaging something from the wreckage of that night.”

A big Australian tour with US pals Joyce Manor and Cheap Girls kicks off in August to support the EP, and will conclude with a freshly sold out headline show at Melbourne’s Corner Hotel as part of the annual Poison City Weekender Festival. The band will then venture abroad to deliver their signature beer swillin’, bro huggin’, heartfelt sounds to the UK, Europe and the US.

Also you can catch THE SMITH STREET BAND With Joyce Manor (USA) and Cheap Girls (USA) on tour!

Tix links and info at www.thesmithstreetband.com