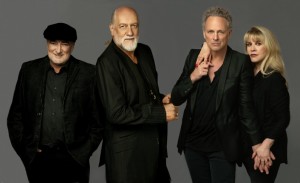 The legendary Fleetwood Mac, one of rock and roll’s most enduring bands, are set to bring their extraordinary show including exquisite harmonies, incomparable chemistry, sleek perfection and classic hits to Australia beginning November 10th in Sydney. The tour continues through November and December. Fleetwood Mac’s spectacular two hour plus show reunites the multi Grammy winning, Rock & Roll Hall of Fame inductees on stage to deliver many of their classic and most beloved songs including ‘The Chain’, ‘Dreams’, ‘Second Hand News’, ‘Rhiannon’, ‘Sara’, ‘Gold Dust Woman’,‘Tusk’, ‘Looking Out for Love’, ‘Don’t Stop’, ‘Go Your Own Way’… the list goes on.

The band is currently on a sold out tour of North America and are receiving unanimous rave reviews: “Two hour s of high energy dynamic performance and an amazing night” Louisville Journal

“We are thrilled to return to Australia where we’ve always loved performing. Our fans there are phenomenal,” commented the group in a joint statement. This will be Fleetwood Mac’s first series of concerts since 2009’s sold out Unleashed Tour the group will also perform in Perth, Adelaide, Melbourne and Brisbane, plus two memorable outdoor concerts the first at Hope Estate Winery in the Hunter Valley and the second at The Hill Winery in Geelong for A Day On The Green before heading onto Auckland. A full list of shows follows this release.

With a career spanning more than four decades and global album sales amassing more than 100 million, Fleetwood Mac live is not to be missed.

Tickets for all shows go on sale 9.00am Thursday June 13.

My Live Nation members can be among the first to access tickets during the exclusive presale beginning at 9.00am Friday June 7. Sign up at

‘Rumours’ the 1977 album that made Fleetwood Mac one of the world’s most iconic bands, garnered universal critical praise, earned the Grammy for Album of the Year and more than 40 million sales worldwide celebrated its 35th anniversary this February with the release of both an expanded and super deluxe editions (through Warner Music Aust). In addition to the ‘Rumours’ reissue, Last month Fleetwood Mac released a four track EP, ‘Extended Play’, comprising of three new songs and one “lost song” from the 1973 Buckingham Nicks days; their first new material in more than a decade.

TICKETS ON SALE 9AM THURSDAY JUNE 13