BON JOVI “Because We Can – The Tour” Australian dates announced 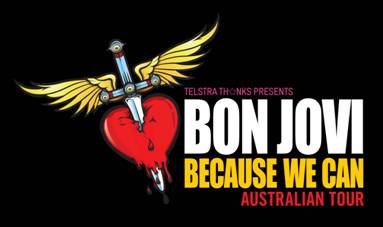 BON JOVI – BECAUSE WE CAN – THE TOUR: AUSTRALIAN DATES ANNOUNCED

Paul Dainty, Chairman of Dainty Group has announced dates for the Australian leg of the “BON JOVI Because We Can – The Tour”.   The tour will kick off in Melbourne on Saturday 7th December at Etihad Stadium followed by a show in Adelaide at AAMI Stadium on Wednesday 11th December, marking the first time Bon Jovi has played Adelaide in 18 years.  The tour then continues on to Sydney’s ANZ Stadium on Saturday 14th December and Brisbane’s Suncorp Stadium on Tuesday 17th December.

Tickets for the Australian tour will go on sale on Monday 20th May at 12noon.  Ensuring there is something for every fan, Bon Jovi is offering a wide range of ticket options starting at $35.00 (plus transaction and credit card charges where applicable).  Tickets can be purchased from www.ticketek.com.au (Sydney, Brisbane) or www.ticketmaster.com.au (Melbourne, Adelaide).

In this spectacular new show fans will be treated to an unforgettable night of Bon Jovi’s huge arsenal of hits, as well as new tracks from the band’s latest album WHAT ABOUT NOW which debuted at # 1 on the Australian charts. The brand new video for the single “What About Now” can be viewed here.

Regarding the ticket pricing Paul Dainty commented, “We wanted to help every Bon Jovi fan get past all the economic doom and gloom and come along to what will be without doubt the best concert of 2013.  This band totally delivers live on every level and I don’t think we’ve seen tickets from $35* for a topline act like Bon Jovi for many years, so this should be a great big Christmas party for fans.”

Night after night, this not-to-be-missed tour has earned rave reviews from fans and critics alike: Billboard Magazine recently described the show as “a joyful musical tour de force.” Tampa Bay Times observed that Jon Bon Jovi “simply does not age. And when he hits those high notes, and we meet him right there at the top of our lungs, neither do we.” Buffalo News called the show “a triumphant, hours-long set of…monster ballads, fist-pumping anthems, and a lot of new material that sounded like all of those things,” and the Centre Daily Times recapped that “ending the night on a high note, the members of Bon Jovi took a bow and exited the stage while the rowdy audience continued to cheer and shout their approval long after the band was gone.”

The group’s return to the road in 2013 has launched the latest chapter in an ongoing blockbuster run which has already secured Bon Jovi’s status as the essential live rock band – having performed more than 2,700 concerts in over 50 countries for more than 35 million fans. “BON JOVI Because We Can – The Tour” kicked off in February and is currently making its way across the globe with dates in the US, Europe, the Far East, Africa, Latin America and Australia.

For Fan Club and Circle Packages go to www.bonjovi.com