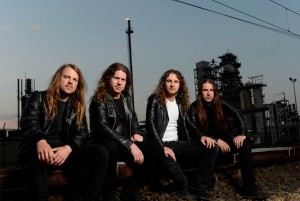 Airbourne are finally returning home to give us a firsthand serving of their crazy, high energy and speaker blowing album Black Dog Barking available Friday 17 May. The band will kick off the tour in their home town of Warrnambool, before heading to Melbourne, Canberra and Sydney before they take the stage at Splendour in the Grass.

Airbourne are making multiple major festival appearances across Europe and the UK before they return to Australia, including slots at Rock Im Park, Rock Am Ring, Sonisphere, Metalfest, Novarock and Download and their own headline tours across the world.

Black Dog Barking follows a hugely successful run with their 2010 album No Guts. No Glory. After a busy year so far, with months of writing, recording and their own headline tour in the US, Airbourne are taking their music home, with a small Aussie tour as a first taster for the new album.

Airbourne are also confirmed to perform at the Metal Hammer Awards Golden Gods Awards in the UK on June 17, where they are nominated for Best Live Band. The band picked up a Golden Gods award in 2008 for Best Debut Album for Runnin Wild.

The video for first single from Black Dog Barking has also recently been unveiled. Live it Up – has all you’d expect from an Airbourne clip; fast cars, lots of Marshall amps, girls and of course rock n roll.
Black Dog Barking is out on Roadrunner Records on May 17.

Tickets are also on Sale May 17 at 9am EST from www.airbournerock.com –