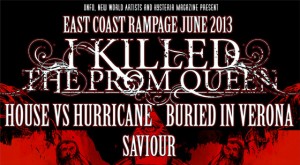 UNFD and NEW WORLD ARTISTS have teamed up to bring fans one of the strongest tour packages of 2013 in the EAST COAST RAMPAGE TOUR.

Kicking off in June, the tour will feature I KILLED THE PROM QUEEN, HOUSE VS HURRICANE, BURIED IN VERONA and SAVIOUR. and will hit towns all along the East Coast of Australia.

East Coast Rampage is the first headline tour for I KILLED THE PROM QUEEN since their  “Say Goodbye” tour in 2008, where the band sold out 4 shows at Melbourne’s Hifi bar and 2 shows at the massive Roundhouse venue in Sydney. Since then members have gone on to embark on a variety of different projects including Bring Me The Horizon and Deez Nuts. 2013 will see the band return with a tweaked lineup and a slew of new songs, with plans for a new album underway. As one of the original bands playing the genre worldwide, IKTPQ are considered forefathers of the Australian hardcore and metal scene.

HOUSE VS HURRICANE will be returning to tour capital cities after a huge start to 2013 which included playing the main stage slot at BIG DAY OUT, performing at the SLAM DUNK Festival in the UK as well as touring across Europe and the UK with the likes of Memphis May Fire, For The Fallen Dreams and Dream On Dreamer. Their album “Crooked Teeth” was released last year to praise from fans and industry alike – garnering ARIA, JIMA and AMP nominations and crossing over into the Triple J market with standout singles “Blood Knuckles” and “Get Wrecked”.

Sydney five piece BURIED IN VERONA have also had a massive 12 months, following the June release of their breakthrough album “Notorious”. The LP debuted at #20 on the ARIA charts and gained worldwide acclaim as the band toured the US, UK and Europe multiple times with some of the biggest names in metal and hardcore. In September 2012 they got the most coveted touring slot in Australia, opening on the The Amity Affliction’s massive arena tour alongside The Ghost Inside. The tour sold over 20,000 tickets and exposed BURIED IN VERONA to a massive fanbase. The East Coast Rampage tour will be their first Australian shows in more than 7 months, promising a huge return to our shores after a very successful sold out US tour with Chelsea Grin and Attila.

Rounding up the bill will be Perth locals SAVIOUR. The melodic metalcore quintet has worked extremely hard in the past 12 months, touring Australia multiple times with bands such as Dream on Dreamer and Make Them Suffer, developing their fan base in both capital and regional cities. After recording their soon to be released new album Feb/March with Fredrik Nordstorm, the band will embark on their first east coast tour of 2013.

The tour will run over the 10 days through June as the bands get ready to record their new records. The shows are in smaller cap venues, with a cheap ticket prices to encourage fans to give all three acts a big response for their last shows on their current records. Get your tickets early, they will sell out!

THU JUNE 27 – The Tempo Hotel, Brisbane (18+)
Tickets from http://weareunified.oztix.com.au and all Oztix Outlets