Thy Art Is Murder & Cattle Decapitation (US) Australian tour announced!

THY ART IS MURDER AND CATTLE DECAPITATION AUSTRALIAN TOUR ANNOUNCED!

Hot on the heels of their nomination in the Best New Band category at the Metal Hammer Golden Gods Awards in the UK, Western Sydney’s Thy Art Is Murder are proud to bring the hate home for their much anticipated headline tour in support of last year’s boundary smashing full length, Hate.

Since the October release of Hate through Halfcut and its top 40 ARIA chart debut, Thy Art Is Murder have gone from strength to strength; signing to worldwide metal juggernaut Nuclear Blast to spread Hate worldwide and completing headline runs of Europe, the UK and New Zealand. This June, Thy Art will be joined by San Diego’s Cattle Decapitation and Aussies King Parrot and Aversions Crown for nine dates across the country.

Cattle Decapitation has earned a reputation for being one of the most controversial extreme metal acts of recent years, and this is a reputation the San Diegan’s live up to. Their boundary-pushing music is designed to turn heads and snap necks, and nowhere is this more evident than on their seventh album Monolith Of Inhumanity or in the bizarre and twisted video for their track ‘Forced Gender Reassignment’ (which you can see here). Now, fans can see Cattle Decapitation when they hit Australia for the first time.

King Parrot is the name on the tip of everyone’s tongue in the Australian metal scene with their debut album Bite Your Head Off kicking some serious arse. The record captures the raw intensity of their live show; defying genres with a cross-section assault on thrash, grind, punk and hardcore. This tour will be the opportunity to see King Parrot in their natural environment – delivering a brutal yet entertaining live set.

Brisbane six-piece Aversions Crown have solidified their position as one of Australia’s most reputable up-and-coming heavy bands. Following the release of their debut Servitude in 2011, the band have worked tirelessly, building a solid fan base nationally, culminating in the release of a full-length slated for later in 2013 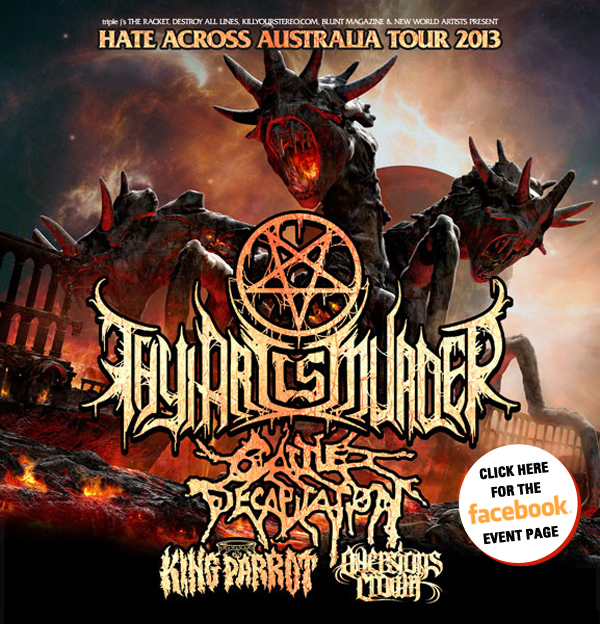