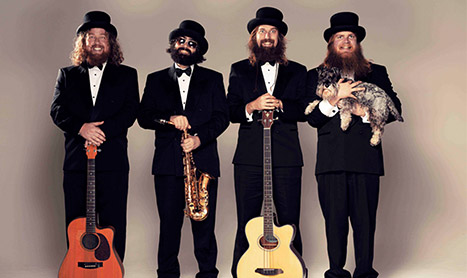 The USA, Canada, Germany, The Netherlands, Belgium, England and Scotland are amongst a list of first-world countries that can expect a visit this year from the kings of totalitarian beard-rock: The Beards.

‘The First World Tour’ will take in a series of relatively well-off countries, including a run of shows in the group’s homeland, Australia.

“People living in developed countries are more susceptible to shaving.” Said the band’s frontman, Johann Beardraven. “They are a high risk group, so it’s important for our message to reach them before it’s too late.”

Over time The Beards have gone from strength to strength. After three albums, four film clips, countless sold out shows across Australia, over two million hits on their YouTube Channel, a place in Triple J’s Hottest 100 (2012) and an ARIA award nomination, The Beards are ready to take their steadfast message into new territories.

“The message is: Grow a beard.” Said Beardraven.

The tour, which will run from March through to June will see the band playing their home-grown brand of beard-related rock anthems across North America, Europe and Australia, and will include festival appearances at South by Southwest, Canadian Music Week, Bearded Theory and Byron Bay’s Bluesfest.

The First World Tour will mark the first time The Beards have ever played in Europe with shows scheduled across the UK, Germany and Holland. It will also be the band’s first time in North America since performing at the opening ceremony of the 2009 World Beard & Moustache Championships in Anchorage, Alaska.

“Our job is not done yet, and we will not rest until all people have beards.” Said bassist Nathaniel Beard.

Their refreshingly original and always-entertaining live act has made The Beards one of Australia’s great underground success stories; but social media and other online resources have earned the group a significant international fan base too. For most of those fans, The First World Tour will be their first opportunity to see The Beards live.