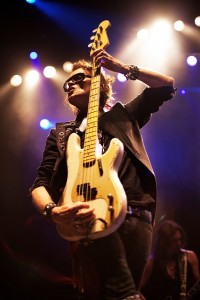 Hot on the heels of his one-off performance at the Stone Festival as part of super group ‘Kings of Chaos’, legendary voice of rock Glenn Hughes will be performing 3 special solo shows up and down the East Coast in late April. Melbourne, Sydney & Brisbane audiences will have the fortune of seeing Glenn perform a spectacular 2 set career spanning show.

Glenn has confirmed that he’ll be playing a dual set performance, kicking off with an intimate acoustic solo set that will allows punters to get up close and personal with the man himself before ripping into a full electric show. Included in the set will be highlights from his time with Deep Purple MKIII, Black Country Communion and his string of successful solo projects.

Supports for the shows will be provided from Melbourne up and coming rocker’s ‘Massive’, fresh off a national tour heading the ‘Miss Ink Australia’ competition.