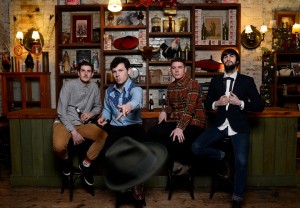 TUESDAY FEBRUARY 12, 2013 – Multi-platinum American rock band  COUNTING CROWS head Down Under for a national tour this autumn, following the 2012 release of their first album in more than four years, ‘Underwater Sunshine (Or What We Did On Our Summer Vacation)’.

Joining Counting Crows on all Australian dates will be Melbourne’s own  JACKSON McLAREN.  Jackson McLaren will be performing solo in Adelaide and Perth, and will be joined by his band, The Triple Threat, in Brisbane, Melbourne and Sydney.  The release of Jackson McLaren’s new five track EP ‘Walk Along The Wire’ sees the 21-year-old emerging as a rare talent.  His songwriting is often deeply contemplative and at other times is simply celebrating the beauty found in everyday life.

There is an honesty and depth in his lyrics and in his performance that makes Jason McLaren the natural choice to open for the Counting Crows across Australia.