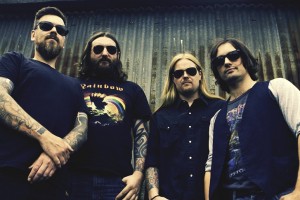 The UK’s reigning champions of balls-out, party-starting, booze-fuelled metal and one of the very best live rock bands of all time, the mighty ORANGE GOBLIN are joining the mighty bill of Kyuss Lives! and Red Fang.

ORANGE GOBLIN have been a permanent and universally admired fixture on the world metal circuit for the past 17 years.  They’re now back, with ‘A Eulogy for the Damned’, their seventh and best studio album. A thunderous tour-de-force of gargantuan riffs, subterranean rumble and electrifying energy, it is the album the band have been threatening to make since they first crawled, with crumpled beer cans in hand, from the grubby Soho shadows back in the mid-90s. They’re back and the party is starting all over again. Whose round is it??