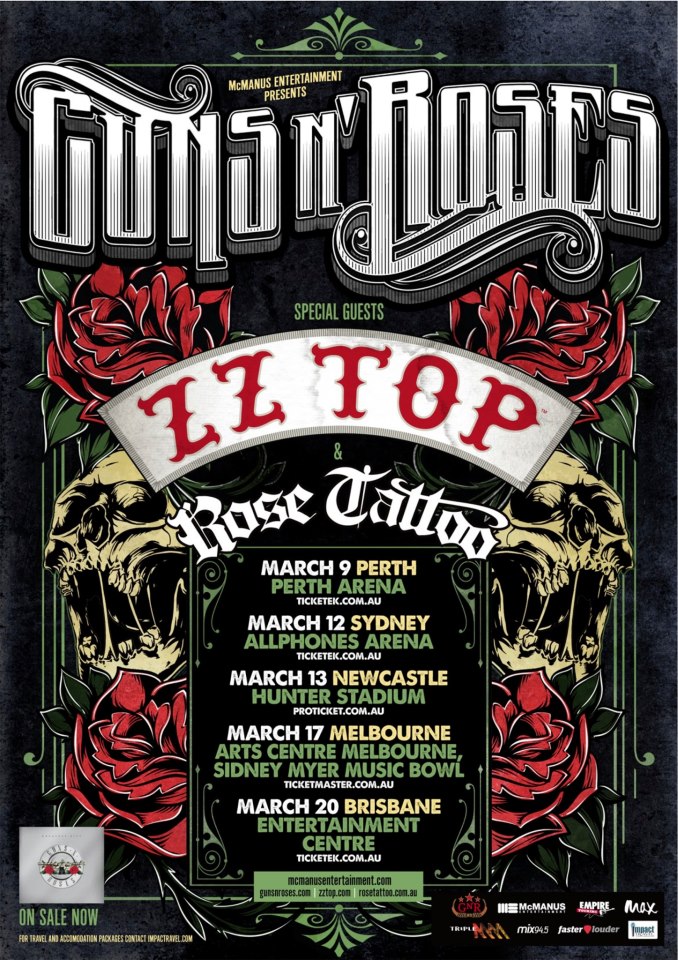 McManus Entertainment is thrilled to announce the return to Australia of one of the world’s greatest rock bands, Guns N’ Roses in March 2013. Joining Guns N’ Roses will be special guests ZZ Top and Australian rock legends Rose Tattoo. A VIP McManus pre sale will start at 12 noon on Monday January 21 – to participate please go to mcmanusentertainment.com and become a ‘Friend of McManus’ by 5pm Thursday January 17 – you will receive pre sale details via email on Friday January 18. Pre sale details will also be posted on our Facebook page. Tickets to the general public go on sale through various outlets on Friday 25 January at 9am.

Promoter Andrew McManus says, “I can’t wait for these shows next March. Axl Rose is a legend and I can’t wait to see Guns N’ Roses play to their legion of Aussie fans again. I’m so proud to be bringing them back to Australia and am looking forward to a great tour with fellow rockers ZZ Top and Rose Tattoo.”

Since bursting out of the LA rock scene in the mid ‘80s, Guns N’ Roses went on to become one of the world’s most legendary rock bands and one of the biggest in music history. Their debut album, Appetite For Destruction, reached number one on the US Billboard chart in 1987 and has sold more than 35 million copies worldwide. The ground-breaking debut album featured classics hits, Welcome To The Jungle, Paradise City and the chart-topping hit Sweet Child o’ Mine. In Australia Guns N’ Roses reached the top of the ARIA album charts in 1991 with Use Your Illusion II and in 1993 with The Spaghetti Incident, a collection of punk and new-wave covers. 1991’s Use Your Illusion I and Use Your Illusion II remained on the US charts for more than 108 weeks and saw the band break new ground with their videos for November Rain, Don’t Cry and Estranged. The band’s most recent release, Chinese Democracy, was released in 2008 and debuted at number one in 13 countries.

Guns N’ Roses continue to tour the globe and have played to millions of fans worldwide. They have sold more than 100 million records worldwide since forming in 1985.

Guns N’ Roses’ special guests on their Australian tour are the legendary Texan trio, ZZ Top. ZZ Top’s image has been as unchanging and memorable as their music. ZZ Top have been together for more than 40 years and were inducted by Keith Richards into the Rock and Roll Hall of Fame in 2004. The band’s iconography – beards, cars, girls and that magic keychain – transcend all bounds of geography and language. They’ve been referenced in countless cartoons and sitcoms and are true rock icons. Billy F Gibbons is one of America’s finest blues guitarists while Dusty Hill on bass and Frank Beard on drums (ironically the only member without a beard) provide the ultimate rhythm section support.

Most famous for their hits Legs, Gimme All Your Lovin’ and Sharp Dressed Man, ZZ Top are sure to thrill their Australian fans with their sturdy American blues and rock style. ZZ Top have sold more than 20 million records worldwide and achieved incredible chart success. Their 1983 album Eliminator was a multi-platinum smash in Australia and is “one of the greatest albums of the ‘80s” according to Rolling Stone magazine. The band’s latest album La Futura, (produced by Rick Rubin and Billy Gibbons) is out now through Universal Music Australia.

Rose Tattoo join Guns N’ Roses and ZZ Top on the Tour. The lineup features lead vocalist Angry Anderson, Dai Pritchard, Paul DeMarco, Geordie Leach and Randall Waller. Rose Tattoo is touted as the best bar-room-blues based rock band in the world and one of the most revered bands of all time. Inducted into the ARIA Hall of Fame in 2006, their hits include Bad Boy for Love, Rock ‘n’ Roll Outlaw, Nice Boys, We Can’t Be Beaten and Scarred for Life.

Line up is subject to change without notice.