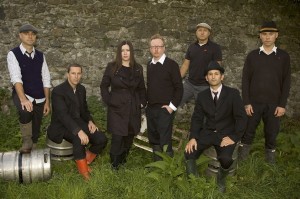 FLOGGING MOLLY have always defied categorisation. The infectious originality of their songs is a badge of honour and key to the band’s creativity, their urgency. They infuse punk rock with Celtic instruments—violin, mandolin and the accordion—and they merge blues progressions with grinding guitars and traditional Irish music. FLOGGING MOLLY’s fans have always appreciated the social and political awareness driving the music.

FLOGGING MOLLY have never conformed to industry tastes; they’ve always been the outcasts who put their fans before commercial success, and they’ve always put their music before marketability. The rewards of such independence and integrity are undeniable on their latest album, ‘Speed of Darkness’. The album, like FLOGGING MOLLY itself, is a testament to youth and resilience, to growing old and the wisdom of scars, and yet for all of the record’s darkness and the speed with which it descends, the ultimate theme is one of light: we can persevere. We must and we will persevere. “Diehard fans might miss Flogging Molly’s manic moments, but Darkness’ lyrical depth–and sonic diversity–are incredibly rewarding.” – Rock Sound

Chicago’s THE LAWRENCE ARMS emerged in 1999 as a saviour to people who wanted nothing but intelligent bare-bones punk rock.

Of course, THE LAWRENCE ARMS really came into their own with the release of 2006’s brilliant ‘Oh! Calcutta!’. On the back of the release, Alternative Press described them as “one of the best honest-to-God punk-rock bands around today.”

Talking shit has long been THE LAWRENCE ARMS calling card… especially onstage. No one is safe and many an artist have fallen victim to the band’s drunken tirades. Their shows, whilst delivering blistering punk rock also seem more like a celebrity roast – just without the subject in attendance.

LUCERO don’t have fans as much as diehards who come to every show, and scream the words to every song. And that’s just the way it should be.

LUCERO are many things but ultimately they simply live to rock and rock to live. No more. No less. It’s really that simple. They have played every whiskey soaked bar and club across the US and Australia now gets it turn to witness these road warriors firsthand.