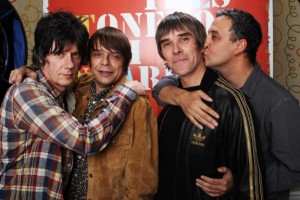 The Stone Roses will be playing their own headline shows on the back of their appearance on the Future Music Festival 2013 lineup, playing three dates in March in Brisbane, Sydney and Melbourne.

Widely regarded as one of the most influential British bands of all time, their self-titled album released in 1989 is widely considered to be one of the greatest albums ever made, and was once lauded as the best ever according to NME, but the band disbanded in 1996, with little hope of them ever stepping on stage together again. In 2011 after months of speculation, the band’s original lineup of Ian Brown, John Squire, Mani (aka Gary Mounfield) and Reni (aka Alan Wren) announced that they would be playing live together again.