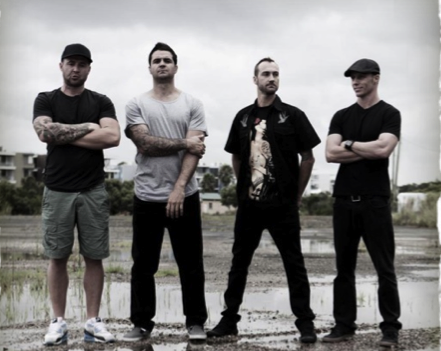 To those of you in the NRL obsessed states, to answer what I am sure is your obvious question – yes the Eric Grothe Jnr you are about to read about, is indeed the same person with a career of over 10 years in the NRL, mostly with the Parramatta Eels. Whilst music has always been a lifelong passion, retiring from the NRL at the end of 2010 allowed full devotion to his band Shinobi and the songs that he had been progressively writing over the course of the last 12 or so years.  The result, debut album Against The Brave 10 tracks of massive, riff oriented rock.

We chatted to a highly enthusiastic Grothe Jnr, who is evidently revelling in his evolution from NRL superstar into rockstar.

Hey Eric, thanks for taking the time to chat today about Shinobi!  Firstly, well done on ‘Against The Brave’, that’s a pretty killer album – it must be a proud moment to have that now out and about!
It is a proud moment for sure.  It’s an album where some of those songs are nearly 12 years old now, I wrote those songs when I was 18 and 19 and it was great to finally have them recorded and out of my head.  I’ve got a heap of new songs I’ve already been writing that I guess you could say are a little more mature.  After playing and writing music for around 12 years now, I’m certainly finding I’m more mature with my songwriting.  It’s great to have those songs out there now and out of my brain!

So has Shinobi always been the lineup that it is now?
Yes it has been, with my previous profession we never had any time to tour or do any proper recording, so we didn’t play a lot of gigs and get in each others hair from the get go like is the case with most bands.  So that has played a big part in us still being together and I dare say in the next couple of years after a lot of touring and recording well will probably all split due to artistic differences and sue each other and all that stuff (laughs).

You are joined in the band by your brother Daniel – so growing up, what came first, a serious love of music, or sport?
Well to be honest, the first thing I remember in my life is music and my brother and I dancing around in the lounge room like gooses to our favourite songs and Dad playing stuff like Yes and Led Zeppelin.  Then sport kind of came next, all my friends played and obviously my father played.  But music to be honest was that first love.

Yes and Led Zeppelin, that’s a pretty good musical upbringing from your Dad!
Growing up with progressive type rock rather than just pub rock is kind of cool because you grow up learning about time signatures and different chord progressions.  You obviously don’t recognise that at the time when you’re young, but now it was definitely a great thing to have had.

Musically – I know your press release mentions the likes of Shihad, Foo Fighters and Helmet and really, that is pretty much what I was picking up whilst listening.  There’s a good balance of heaviness with accessibility, for want of a better word…  Is that how you personally would describe the Shinobi sound?
I really live big, ballsy, riffy music and I love melody so I guess the sound has come together that way naturally.  I don’t really sit down and write a song to sound like anyone in particular, I guess you just naturally do that because you’re listening to what you do at the time.  The bands I’ve listened to mostly over my time are Helmet and Downset and that big riffy type music, I was just a kid who loved a loud guitar with that tuned down riffarama.

When it comes to songwriting, is that something that the whole band is involved in, or is it handled by a few key players, such as yourself?
I pretty much write a riff and will have a beat in my head because drums was the first instrument I kind of learnt when I was young.  Then I take that to our drummer usually and we will sit down and add some structure to the song.  I’ll usually have a melody worked out as well and then write the lyrics usually towards the end.  We all contribute in our own way and with our bits and pieces, so everyone usually gets to have a say.

As far as the recording, was that largely done in 2011 after you had retired from the NRL?
That’s right, when I finished playing, I contacted Darren Jenkins who is a friend, producer and engineer and said I really need to get these 10 or so songs out of my head and recorded, as I’m sick of playing them at home and not having them recorded, so lets book a date.  The first thing I did was book a date as it gave me something to work with, otherwise I probably would have farted around.  So that made me put my head down and bum up and get to work.  Even going in, I thought I was prepared, but I very quickly learnt that I wasn’t, so I’ve hopefully learnt a lot in readiness for the next time!

Going from the rigours of pre-season training as an elite athlete, to knocking out about 10 hours a day in a recording studio, how would you compare the two?
You know what, there’s a lot of similarities to be honest, without sounding like an idiot.  The stress and the mental toll recording takes on your body, at the end of a full day in the studio, I would lay down and feel like I’ve done a session of pre season training, your heads that noisy and you just can’t switch off.  It’s my favourite thing in the world and I just can’t wait to get back in the studio again.

For your first album, you certainly wore a few hats, singer, guitarist, even listed as a producer I see…
Definitely mate, it was just all new to me.  I didn’t initially understand how it all worked, you know what does a producer do exactly, what does an engineer do exactly, but Darren Jenkins helped me all through that.  At the end of the recording he was like mate, you’ve can basically say that you helped produce the album.

The first single is Against The Brave which has been getting some decent airplay – can you share a bit more about what this song is about?
Well it’s a song about bullying in general, anything from bullying of the masses by Government through to schoolyard bullying and the attributes and bulky adopts to a weaker person or body of people.  I’m not generally interested in being over political with things but that song kind of turned out that way.  I thought it would be a good first single as it represented our sound across the board, I didn’t expect it to get as much airplay as it has gotten, so that’s a really refreshing thing. 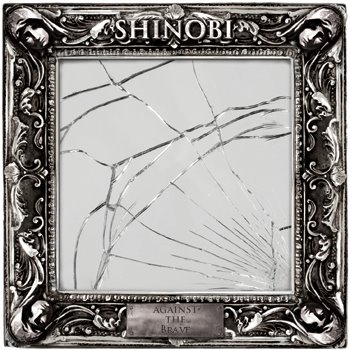 My favourite song at the moment is The Finding, what do you have to say about the background to that track?
I wrote that one about 7 years ago I think it was.  I just had a riff and I thought it was kinda one if my softy love songs that I was a little shy to show people, but I ended up showing a good friend of mine and he said mate “you have to finish this song”, so I did and kind of beefed it up a little bit but its basically about finding your passion and following your heart.

The rock scene here in Australia is certainly an interesting beast and I notice that so far you guys have been making a point of not just concentrating on playing Sydney, but getting to some regional type areas?
Well that’s it, initially we thought you know we’ve got to play in Sydney a lot and build a good Sydney crowd, but after learning the hard way, you realise that out in the regional areas the kids are so passionate and love their music so much but they just don’t get a lot if concerts out there, so why wouldn’t you go out there and play to people who are just hanging out for it.

For you personally, how different a feeling is it to be up on stage fronting a band with the spotlight firmly on you – compared to playing in front of 10’s of thousands of people on a sporting arena?
It’s really funny, it’s been a really good flooring of the ego to one minute run out in front of 80,000 screaming people and you’re in that team environment.  Then in a band there’s also that team style environment and your band “runs” out in front of 15 punters and 7 of then aren’t even there for the band (laughs).  So I really like what that does for the ego as it makes you realise how hard you’ve got to work.  To see that crowd slowly grow though with each gig is really special and it means much more to me than having played in front of humongous crowds on the sporting field.

Myself being both a sport and music lover, I’m always intrigued by the music sports people listen to motivate themselves before a match etc, so what were some of your regular bands/songs on rotation to pump yourself up?
It’s weird, I used to have a pretty eclectic mix as one day I used to have Burn My Eyes by Machine Head to really pump up.  Then I’d be listening to Do We Speak A Dead Language by Downset and the next minute I’d be listening to Massive Attack or something to relax me, just depending on how I was attacking each match.  Game days were pretty intense, they’re a whole day affair, you wake up, gotta eat properly, stretch and drink fluids all day.  Then when you arrive the coach is in your ear from the get go and it’s just so hectic.  So depending on how intense the game was, depended what I would listen to.  Some days I was in Canberra and it would be freezing cold and I needed to get angry so I would get into the heavy stuff.  It would be interesting actually to look over the years at exactly the stuff I did listen to and check the soundtrack of my footy career!

It will be interesting to see if that comes full circle with the music of Shinobi used to motivate and pump up in the weeks, months, or years ahead…
It’s funny you say that as a friend of mine mentioned via social media last night “trained really hard and just listened to Against The Brave” by Shinobi” which he said really pumped him up which was cool as I never thought of that song as exercise music, but I was really happy to read that, was a cool feeling!

Well Eric, it’s been great chatting and once again well done on Against The Brave and I personally hope to see you guys down playing in Melbourne on the horizon!
Appreciate the call and the chat, were just happy that the music is getting out there and heard by people like yourself and we can’t wait to get out and play to everyone.