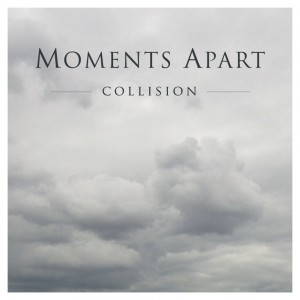 In 25 words or less: “a powerful assault of anthemic modern rock meets metal, high on blistering guitar solos, massive choruses, intricate arrangements and topped off with a quality sound/production that belies their independent status.”

Whilst the name Moments Apart may be a new entity in the Melbourne music scene, the members thereof will certainly not be new to those of you with a couple of feet firmly entrenched in the Melbourne rock scene.  Essentially, the origins of Moments Apart rise from the ashes of the band formerly known as Teargas – which some of you may know as those ‘crazy’ melodic rockers, or some may know from their transformation with ‘hearts of darkness’ and ‘bleeding vengeance’ into a sound heavily influenced by the metalcore sounds of the time – mid 2000’s.  Well fast forward 5 years and now the guys return to launch Moments Apart and their debut EP Collision.

Self(ish) Control opens up the EP and serves as the track many will have as their first experience of Moments Apart, being the lead single and video.  As good as any track on the EP as a representation of what Moments Apart is all about, it’s a powerful assault of anthemic modern rock meets metal, high on blistering guitar solos, massive choruses, intricate arrangements and topped off with a quality sound/production that belies their independent status.  For those of us that like things a little more “traditional” with our rock and metal, I can report that the vocals delivered by Al Gammie contain no hint of screamo and when I say blistering guitar solos, Kyle Ross can shred in the true traditional sense.  Pleasingly, guitar solos are an integral and highly prominent core of the Moments Apart sound.

Whilst the opening trio of tracks hit you in the same nether regions stylistically, For You throws in a bit of a curveball.  With the intro featuring the hint of some keyboards there’s more than a hint of Finnish rockers HIM initially.  The track features the co –lead vocal of Nelli Scarlet, who some of you will know from Melbourne band, The Scarlets, get to the chorus and the song takes on more of a traditional up-tempo hard rock vibe.  Reveal is the band at their heaviest and is something that could almost have been lifted off the latest Fozzy album.  Closing track Escape has an “epic” quality that really showcases the bands collective talents as far as songwriting and musicianship is concerned.

A highly impressive EP from a band that absolutely needs to be checked out by anyone that digs the likes of Shinedown, Alter Bridge and Stone Sour.

Check out our interview with Moments Apart right here…

For fans of: Shinedown, Alter Bridge and Stone Sour