Jamie Hay – King Of The Sun 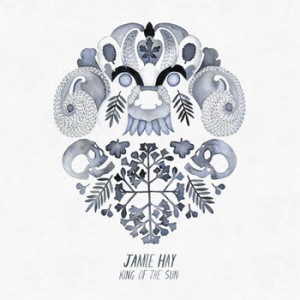 Self described as “that old guy with a beard”, Jamie Hay is a name that would be well familiar amongst those into the local Aussie punk rock scene, with past bands including Conation, A Death In The Family, Fear Like Us.  For some, myself included, your very first introduction to “that old guy with a beard” could very well be through this, his debut solo album.  A largely acoustic guitar driven album, having been recorded in the bleakness of a Tasmanian winter, the well worn and at times haunting vocals of Hay propel the lyrical tales of resilience, courage, heartbreak and tragedy, in a way that musically portrays this bleakness.  So don’t let the King Of The Sun album title fool you into thinking this is breezy, summery, jangly acoustic driven rock.

Old Photograph kicks things off with a driving, powerful acoustic backbone and is by far one of the albums heaviest songs in a musical sense.  Rabbit On is no less powerful than the opener, but this time it’s the dominance of Hay’s vocals which provide that power, whilst his impassioned pleas on Wounds are downright haunting.  Newcastle offers up recognition of Hay’s origins in yep, you guessed it, Newcastle…  Interlude is just that, a 1 minute highly enjoyable instrumental guitar piece.  With a slight country twang and the albums most immediate chorus, One More Lament reminds me of a cross between the Gin Blossoms and Something For Kate, my favourite track on the album, yep, I think this is it.  Whilst acoustic guitar is the weapon of choice throughout this whole album, the appealing thing is there is enough variation in song style from track to track to really hold listener interest.  Hand In The Quicksand introduces mandolin into the mix, however the a Capella of The Gift Of The Years drops the guitars all together.

If you are a fan of Hay’s past work, then I’m sure you’re all over this release already, however for those with a love for acoustic driven folk/punk rock, then this is an album most definitely worthy of checking out!  In fact, you can do so right here, through this link: http://hobbledehoy.bandcamp.com/album/king-of-the-sun