If there’s one thing you can expect from Gay Paris – the “dirty f*cking rock band from Sydney – it’s expect the unexpected.  So it came as no real surprise when front man WH aka Wailin’ H Monks called in whilst sitting in a park, bathed in sunshine, covered in ants…  The reason for the call, well there’s lots happening in the Gay Paris camp right now – they are in the midst of their Death To Spring national Tour, there’s a new single to check out The Demarcation Of Joseph Hollybone and in early 2013, you can expect your loins to be aurally aroused with a brand new album, The Last Good Party.

If all tickles your fancy, then read on and let WH tell you more…

So first things first, you’ve got some new music out and about and a tour about to kick off, so the name Gay Paris will be floating around the traps.  For those that may not have caught you guys the first time around – what are the important things we need to know?
It’s probably going to be the biggest thing in Australian music since, ummm AC/DC formed?  Or since the last time we toured, which was huge, but criminally underrated.  People who were there know exactly what I’m talking about, people who weren’t there, should be god damn ashamed.  Look, I appreciate shame, I make time every day to sit in the shame corner and think what I’ve done.  So well done you shameful sons of bitches, well done!

Ostensibly what the tour is saying is awakening the heat of desire and passion, of satisfaction, creating the good life through friction and fire, in the belly of the loins.

And someone who hasn’t seen Gay Paris before, that’s what they can expect, loins?
Oh yes, they can certainly expect loins, it’s all thrust and some busting, but mainly thrusting. I like to get dank, I like to get dirty and I like to keep it dark and that’s going to be how things are.  But things will remain hot and I will remain scantily clad…

You’ve got The Beards and The Snowdroppers along with a few others joining in for the ride on this Death To Spring tour the way, that’s going to be a lot of facial hair in some cases, but no doubt a lot of fun given you’ve played with those bands on numerous occasions!
We’ve built these friendships over the last few years and its just cool to be able to play shows with them. We could play with a fucking bezerk metal band like Total Unicorn but then we could turn around and play in Melbourne at a folk festival with Brothers Grim & The Blue Murders and then go with a comedy band such as The Beards.  It’s always weird because we rarely play with other rock bands, but I love those kind of mixed up bills and going to see then when I’m in civilian mode and not in my cape, they’re just awesome. We’ve made so many excellent, irresponsibly decadent pals over the last few years and we get to play with most of then on this tour, which is fucking cool!

Your new single The Demarcation of Joseph Hollybone is a big slab of rifftastic rock, how indicative is this of what we can expect on the new album?
I think we’ve consciously delivered something with obvious sex appeal this time around. I won’t say that the album is less heavy, there’s a lot of banging moments, but there’s also a lot of moments to bang too.  There’s maybe some streamlining happening as well.  On the last album there was an inclination to include every great riff we had, this time we started with around 400 riffs and we culled that down to what we’ve used on the album.  So the single is indicative in the sense we now have more understandable structures and a lot more breathing room.  Then there’s like 3 or 4 songs where it’s a case of I can’t believe how many riffs we packed in, why did that part happen now, songs.  We are very complicated people…

So you could say then it’s a case of going more for the loins with this album rather than beating people around the head with riff after riff, which you aimed for with the first album?
Well yes, this is not necessarily music for the ladies.  It’s for the ladies and gentlemen.  I’m using these terms loosely, because this stuff isn’t for high society.  It’s rock n roll, I want you to sneak a six pack into your bag and drink warm beer at our gig.  I don’t want you to pay those drink prices, but hey if you’ve got the money, hell come up and shower me with rewards.  We haven’t toured in ages, I really need to be told how good I am, I’m craving praise.  We wanted to make the sex more obvious, I don’t want people to have to think about sex, well I want you to think about sex, but I don’t want you to think about, thinking about having sex, and it should be easy…

Do you care to share who this Joseph Hollybone is exactly?
Well yeah, he’s from the first record we had a character known as Future Wolf.  I’ve always thought of this guy like, well he’s not a man and he’s not a wolf and he’s not a werewolf and he’s not a morphisised wolf, he’s a man and a wolf.  When he’s wearing his man clothes, his name is Joseph Hollybone. This is the first opportunity I’ve had to talk about him in that sense because on this record we get to see a different side of him.  As much as he’s still a terrible person, he is definitely the moral north, he’s the most righteous man wolf around, amongst this scandalous, scandalous group of individuals and society as a whole.  So I don’t know if he’s an anti-hero, he’s looking for salvation and I think it’s selfish and he’s sorry, but I think he’s still a very selfish guy/wolf.  I don’t know if you can ask a wolf to be sorry, but he certainly makes a big deal of saying that he is.

It sounds like that song is crying out for a film clip, is there one planned?
Yes it is, yes it is and that thing has been shot.  I haven’t actually seen it yet, it’s actually the first video we’ve shot that we are not actually in.  I have a vague idea of what the clip is, but let me say that it involves pugilism, the art of fisti-cuffs and dreams are made and lost. The guy who we pitched it at was like holy shit, that’s glory and downfall, which realistically is where this record is aimed at conceptually. So it all really came together quite well.

Speaking of glory and downfall, there’s obviously a hefty dose of that sentiment in the title of your album, The Last Good Party?
I think the only downfall you can have if you’re partying is when you stop, which indeed is the last party and means you have to keep going forever.  The answer to meaning and salvation in life, I think, is if we have to exist under the pre-supposition that this is all there is, you don’t have to worry about the bigger questions, if there are bigger questions, I don’t know?

Speaking of bigger questions, you went down the Pozible path as far as raising some funding for the album – so if that didn’t prove to be successful, would we have perhaps seen maybe just an EP release, instead of a whole album?
Well we’ve got different management and stuff now, but we were asked earlier if we could do a string of singles, as everyone just shops on iTunes, or do an EP and bring out three tracks, do a split…  Well NO, we are in the business of albums and in the business of concept albums.  I know its just rock n’ roll, but god damn, fucking art is really important and just because it’s easy to consume, doesn’t mean you have to take the easy way.  The whole last record was an appeal to art, as a giant concept and you know it’s hard to do, but if its what you love, why not do it all the way you know?  I’m not begrudging people’s rights who want to do an EP and if we were a different kind of band, maybe we would.  It’s only an 11 track album, so it’s not that epic in scope but in modern consumers, it will require an attention span.  It’s written to be appreciated as a whole, it’s a concept piece, a high art wankery of the highest calibre!

In this modern day of shorter attention spans, have you been finding that people actually are appreciating this “high art wankery” as you referred (laughs)…
Well I think the way that we’ve done this and maybe it’s the stage persona of the band, but we find that all of these things – and I won’t attach this word to the band, but I’ll attach it to the music – there’s a mythology building around us and in the sense of myths, I don’t mean a falsehood.  I mean something that’s parody’matic, I mean something that’s exemplary and I know it’s rock n roll, but I think people are really finding attachment to some of these characters and weird stories.

So after this tour is done with, what’s next on the horizon, when can we expect this album to be unveiled?
I got really sick during recording, so I’ve still got to do a few vocal tracks, so I’ll be doing those on some off days during the tour.  So that will be done by Christmas and I assume the record will be out in February.  We’ve got at least one more single before the album comes out and then the album will come out and I’ll be some rich and famous.  Probably not from music, but I’ll work something out before then, which is an ongoing process, don’t you worry…

Saturday November 10 – The Patch, Wollongong
With The Peep Tempel +Rocking Horse and the Baby Dolls

Thursday November 15 – Prince of Wales, Bunbury
With The Beards + The Snowdroppers

Saturday November 17 – Rosemount Hotel, Perth
With The Beards + The Snowdroppers

Sunday November 18 – The Indi Bar, Scarborough
With The Beards + The Snowdroppers

Friday November 30 – The Tote, Melbourne
With The Peep Tempel + The Stiffys

Saturday December 01 – The Nash, Geelong
With The Peep Tempel +The Stiffys 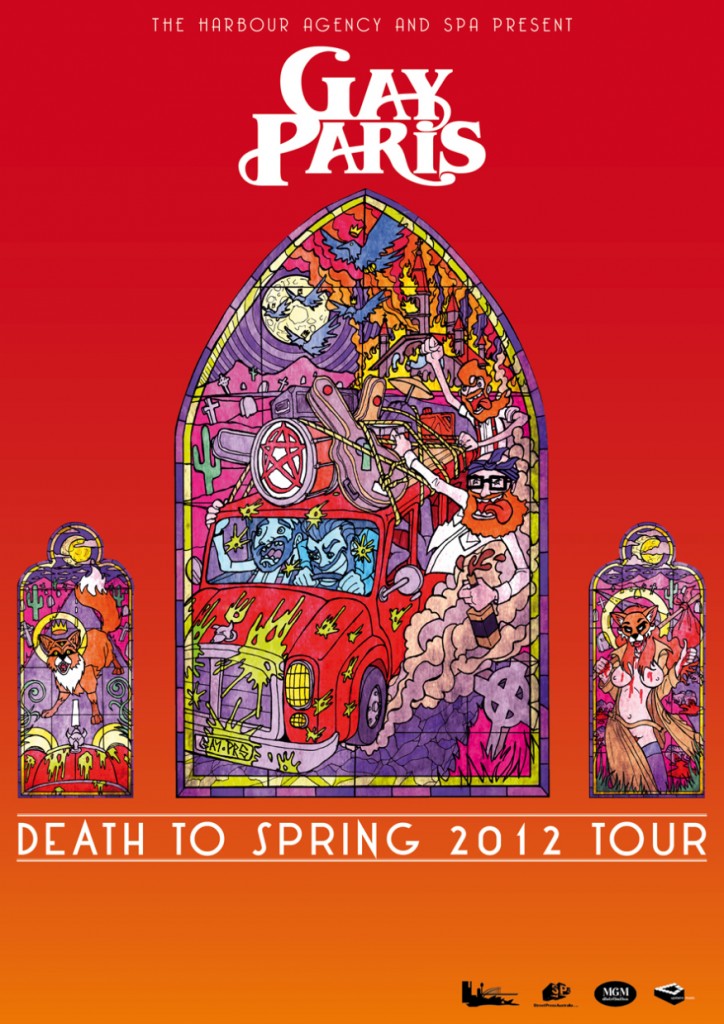