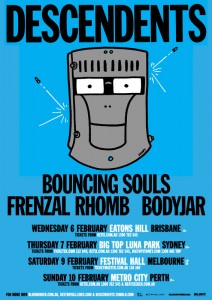 Punk rock legends DESCENDENTS; one of the most loved bands of any genre to have generated over several decades of popular music are headed back to Australia in 2013. This time they’re bringing a cross-section of the punk rock’s finest with them for massive shows with good vibes and fun times. Descendents + Bouncing Souls + Frenzal Rhomb + Bodyjar = music lovin’ guys and gals all over Australia will be positively giddy with delight. Brisbane, Sydney, Melbourne, Perth; get ready for the must see gigs of the summer.

DESCENDENTS have one of the most enduring legacies of any punk rock band in history. They’re the kind of band that stirs an all-consuming adoration in their fans, many of which have Milo’s unmistakable cartoon likeness tattooed across their limbs. Their first ever Australian tour back in 2010 caused near panic as punters of all ages scrambled for tickets and viewing spots to witness live performances of classic tracks “I’m The One”, “Coffee Mug”, “I Don’t Wanna Grow Up” and “Everything Sucks”. It became immediately apparent that Descendents captured the hearts of multiple generations of punk fans with their tales of adolescent discontent and their grip refuses to loosen with age.

Asbury Park, New Jersey’s BOUNCING SOULS celebrated their 20th birthday in 2009, continuing to be every bit as scintillating on-stage as they were through the 90’s and into the 00’s.  Their last trip to Oz was in 2010 alongside buddies Hot Water Music, where they fronted to a set of sold out shows with their adored and extensive catalog of heartfelt punk anthems.

FRENZAL RHOMB are still offending audiences and impressing punters off the back of their AIR and ARIA nominated 8th album Smoko at the Pet Food Factory, which was recorded at the Blasting Room, in the US in the capable hands of Descendents’ very own Bill Stevenson. Ten years and eight albums deep, Frenzal are in the finest form of their career.

BODYJAR returned to Aussie stages last year into the warm arms of the Australian music-listening public after a brief hiatus. Smashing out a series of rad shows, the Melbourne lads launched the first ever vinyl release of their classic 1998 album No Touch Red by playing it in full and mustering a bevy of Aussie punk rock royalty to help them celebrate.

The Descendents 2013 punk rock adventure will take over Australia for four gargantuan shows in five days. This line-up is a once in a lifetime chance for punk rock lovin’ folks of all persuasions. Like some extraordinary Voltron, these four superpowers combined will form a powerful tour de force of punk rock.

Tickets on sale 9am Thursday November 22