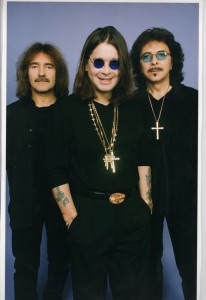 THURSDAY NOVEMBER 29, 2012 – BLACK SABBATH – the band credited with creating heavy metal and one of the most influential bands of all time – has added a 2nd and final Melbourne show to their first Australian tour in nearly 40 years.

With tickets for the first Melbourne show now sold out, Black Sabbath have confirmed they will perform a 2nd and final show at Melbourne’s Rod Laver Arena on Monday 29 April.

Tickets for the 2nd and final Melbourne show go on sale at midday Friday December 7.

My Live Nation members can access tickets first, during the exclusive member pre-sale beginning 10am Tuesday December 4. Sign up at www.livenation.com.au

Original band members – the Prince of Darkness himself: Ozzy Osbourne, bassist Geezer Butler and guitarist Tony Iommi will make a thunderous return to Australia in April 2013 for packed out arena shows in their first Aussie shows since 1974.

More than 40 years on, the iconic Black Sabbath continues to be held in the highest regard and has sold in excess of 70 million records worldwide.

All Other Shows On Sale Now