Nick Diener of The Swellers 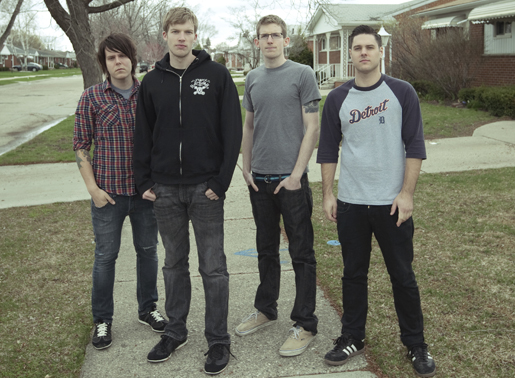 “It was simple. We wrote 5 songs, with no pressures, no deadlines, no goals, no nonsense, and then recorded them mostly at my home studio. It was such a return to form, like we were making a record 10 years ago.”

From Press Release: Over the last decade, The Swellers have taken their hard-edged, yet accessible style of punk to the world stage. The last four of these years have been spent touring non-stop with the likes of Less Than Jake, Set Your Goals, Four Year Strong and A Wilhelm Scream. This touring followed on the back of 2011’s album Good For Me, the third for the band. The diverse sounds on the album have seen them fit onto mixed bills all over the world, including a place on the Counter Revolution tour that saw the band head to Australia for the very first time.

While The Swellers started 2012 by leaving former label Fueled By Ramen, the year sees the band continue to grow both in terms of their skills as musicians and in their fanbase. Having already released the Vehicle City Blues 7-inch in May through SideOneDummy Records, the 7” sold out before its release. The band are now returning to Australia for a national headlining tour.

We got The Swellers vocalist Nick Diener to answer some questions for us about the new EP, touring and the ten year anniversary of the band.

You’re in Australia now in support of your new EP for some intimate shows, what can we expect to hear at these shows?
We’ll be playing songs spanning all of our records.. and a decently long set! Counter Revolution only had us playing 25-30 minutes, so we can finally cut loose and get sweaty on this tour. Not sure exactly what the Australian fans want to hear, though, so we’ll be asking at the shows/on twitter!

You were one of my highlights at Counter Revolution last year, do you have any memories of being part of that tour you can share with us?
Thank you! We had a lot of days off on that tour and some of the best times hanging out with the bands. Got to be great buds with hellogoodbye and Make Do And Mend and it was great seeing the Story Of The Year and the Every Time I die guys.

Now, stepping away from your label earlier this year, what has this now enabled you to be able to do as a band that you felt you may not have been able to do previously?
We have a lot more freedom as far as international distribution and merchandise goes. We can also put out releases whenever we want, however we want. It’s a great feeling!

You have a new EP coming, can you talk us through how this was put together compared to your previous releases?
It was simple. We wrote 5 songs, with no pressures, no deadlines, no goals, no nonsense, and then recorded them mostly at my home studio. It was such a return to form, like we were making a record 10 years ago. They ended up being 5 of our favorite songs we’ve ever written together.

Song wise, was there specific inspiration behind the tracks on the EP?
The last year has been tough. The industry is not nice sometimes. Our fans and new listeners will understand the vibe when they hear the songs. It’s pretty bitter and angry. It was nice to get out the frustration in the form of a new record.

Are you currently working on an album that we may get to hear sometime soon?
Slow down, we haven’t even put out this EP yet! But… yes. We’re always writing. Can’t wait to keep making records.

The vinyl medium, a once defunct way of releasing music is suddenly popular again, now bands including yourselves are creating music specifically to be heard on vinyl, is this something you will continue doing?
When they stop wanting it, we’ll stop making it! I looked at a CD the other day and it seemed so.. ancient. For some reason a vinyl record just feels timeless. The artwork is bigger, and they just feel like you really HAVE the music.

Now, let’s talk anniversaries, many may not know you’ve been a band for 10 years now, looking back, can you give us three moments that stand out for you and or the band as the best:
1. The first times we got to travel overseas, whether it was Asia, Europe, or Australia.. our minds were blown that our music had taken us to such great places.
2. Anytime we play a show and the crowd sings along to every word. It’s the best feeling and we feel very appreciated. Makes the show more fun for us! Our 10 Year Anniversary show in Flint, Michigan was a great example.
3. Putting out this new EP on our own and getting such a good reception from people because of it. Feels great that we can do this on our own after so long. Very rewarding.

I wanted to say that ‘Inside My Head’ was close to, if not my song of the year last year, absolutely love it, and the video was great, how much fun was it making that one?
Thanks! It was a pretty fun video. It was a nightmare trying to get the label to approve everything.. too much censoring.. it didn’t quite end up the way we wanted it to. Luckily our next video will be pretty straightforward!

After Australia, what are your plans for the remainder of 2012?
We have a headline run in the US for 2 weeks, and then spending some time at home!

Lastly, do you have a message for your Australian fans?
Come to the shows! Pick up our new EP! Let’s hang out! Thanks for being rad.

Catch The Swellers in Australia

Saturday, 13 October 12 Bang, Melbourne 18+
Tickets at the door only

Saturday, 20 October 12 Thriller, Brisbane 18+
Tickets at the door only