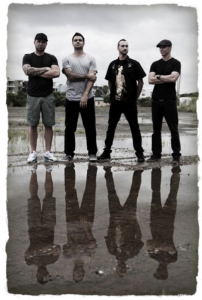 Despite playing over 200 NRL first grade games, representing NSW in the State of Origin and playing for Australia, Eric Grothe Jnr’s main love has always been music.  Eric always kept his music and sporting life separate because this is no gimmick! A highly talented singer/songwriter/guitarist Grothe formed the firebrand heavy rock outfit SHINOBI in 2004. Teaming up with Eric are his brother Daniel on bass and life-long mates Darren Stapleton on guitar and Wayne Langfield on drums. It wasn’t until last year after retiring from football did Eric find serious time and really crank up the SHINOBI machine.

They released an EP in 2008 and the tracks were top selections on Triple J’s Unearthed program, and in 2012 one of the EP’s singles “Trouble” was used in a National Geographic documentary called “The Aussie Way Up’’ and to date it has had over 20 000 Youtube views just via word of mouth.

In 2011 SHINOBI hit the studio again and the result is the blistering debut album ‘’Against The Brave’’. The first single, the title track “Against the Brave” has been a revelation with constant rotation on Channel 9 sports programming including the NRL Grand Final, promo clips for Danny Green (Boxer), extreme sports highlights packages, a teaser for a web series Dead Heart created by Kristy Best on Youtube and a feature in the top end surf movie ‘’One Touch’’ which recently hit cinemas. The band was also buoyed by selling out the Annandale for the album launch!

“Against The Brave” is now getting regular airplay on TRIPLE M and other radio stations across Australia, airplay on Channel V and has 10,000+ YouTube views and climbing. All thanks to the power of word of mouth and social media. BUT now it’s time to unleash the future of Australian Rock on to the wider public!

Fusing the gut hammering riffs of Helmet with the intensity of Shihad, the energy of The Foo Fighters and the melodic beauty of Silverchair, SHINOBI might just be the total rock package! Apart from the highly accessible, memorable and anthemic nature of the songs, the marketability and allure of front man Eric Grothe Jnr cannot be denied. SHINOBI are more than a band they are set to create their own brand.

The album ‘’Against The Brave’’ will hit stores on October 26th via Riot Entertainment / Warner Music and that will be followed up by the 2nd single ‘’Stitches’’ around the same time. Their potent live show is winning them fans in droves and with the official release of the album and more shows to promote the record this will guarantee that SHINOBI finish the year on a high!

Australia needs a new Rock Icon and SHINOBI could just be that……….

* Their debut album launch at The Annandale Hotel was huge! Doubt you could fit more people in!

* Shinobi & Eric have a combined social media presence and reach to over 17,000 people

* Regular airplay on Triple M, at all hours as well as other commercial radio stations.

* The single Against The Brave was also used for a teaser for web series Dead Heart.