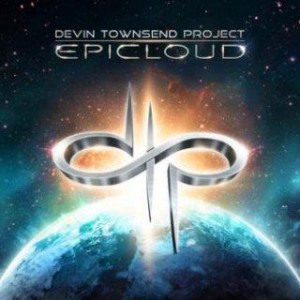 In 25 words or less: I’ve listened to Epicloud now well over 10 times and I’m still completely overwhelmed with each listen, but I keep coming back for more, finding more and enjoying it more.

Devin Townsend, when I first heard him on the Steve Vai album Sex & Religion, to me it was a godlike musical pairing and I’ve played that album to death over the past 20 odd years.  Since those beginnings, Devin has hit us with around 15 album releases either as Strapping Young Lad, solo albums, The Devin Townsend Band or the Devin Townsend Project.  Interviewing Devin last year in the lead up to Soundwave, his mention of a new release he was working on named Epicloud certainly got me excited.  “Epic hard rock with a real summer vibe” was how he described it and my goodness, he wasn’t wrong.  From the opening 40 second joyous vocal track Effervescent, Epicloud is dominated by a mission in creating an overall mood and aural experience, than simply delivering a collection of songs.  Dutch singer Anneke van Giersbergen once again features as a key element of the “Project” and throughout Epicloud, is entrenched in each and every song.  Reading the press release accompanying the album, I can’t help but pick up on Devin’s comment that going back to his musical origins, that “he loved Def Leppard, he loved the Eurythmics, he loved Enya and he loved movie soundtracks”.  As crazy as that combination sounds, wrap that up in a metallic, bombastic, hard rock sheen and that’s certainly what he’s been able to accomplish on Epicloud.  But when it comes to Devin Townsend, you pretty much have come to expect anything, right?

I’m purposefully not going to single out any of the 13 tracks, as this is an album that warrants every single second of it’s 49.8 minutes to be completely and utterly consumed.  I’ve listened to Epicloud now well over 10 times and I’m still completely overwhelmed with each listen, but I keep coming back for more, finding more and enjoying it more.  This is the album that I personally have been longing for from Devin Townsend since Sex & Religion and knowing Hevy Devy and I’m sure I’ll be waiting another 20 years for something similar, but that’s just part and parcel of following Devin Townsend, a true musical genius, right?.

For fans of: Devin Townsend and those who seek that something more from their music…

Label: Inside Out Music