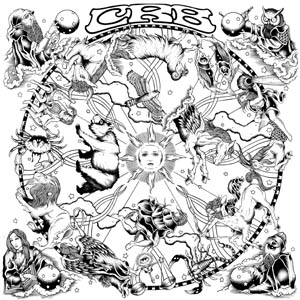 In 25 words of less: Praise the lord for people such as Chris Robinson who make albums for those of us who still enjoy the complete listening and visual experience.

They say never judge a book by it’s cover right?  Well in this instance, on new album The Magic Door, the Chris Robinson Brotherhood deliver everything you would expect from the trippy album cover as displayed to the left and from CD packaging that is about as Vinyl as you can possibly get. Yes, gatefold, grooves in the little black disc and well considered artwork.  Since the last album Before The Frost….Until The Freeze from The Black Crowes back in 2009, the Chris Robinson Brotherhood earlier this year released Big Moon Ritual, with The Magic Door being that albums companion piece.  Slightly more rocking than Big Moon Ritual, the songs are no less sprawling, conforming to no song boundaries other than the live jam feel that the Brotherhood execute oh so well.  But really by now, anyone with a love of The Black Crowes, or Chris Robinson’s solo work, pretty much has come to know what you can expect and this album doesn’t deviate from that.

Opening track Let’s Go, Let’s Go, Let’s Go a Hank Ballard cover, is a song the Brotherhood have made a live set staple, whilst Appaloosa which is lifted from the last Black Crowes album, sees the song now really coming into it’s own.  The bouncy, sunny groove of Vibration & Light Suite takes the listener on a 14 minute journey, with some of the albums best lead guitar work and a few tripped out moments towards the end.  Little Lizzie Mae, charming by name and charming by nature with it’s rollicking bluesy vibe, contrasts with the mournful Sorrows Of A Blue Eyed Liar, with Chris Robinson’s vocals just drenched in emotion.  On the Australia version of the album we get three bonus tracks one of which is Blue Suede Shoes – yes THAT Blue Suede Shoes, not that you would hardly recognise it.

I really couldn’t put it better myself than the words of Chris Robinson himself “In an age of people just writing songs to fit in to commercial formats, we feel we’re making recordings for the connoisseurs, people who are into music on a deeper level…  We’re interested in songs that we feel fit into our version of the cosmic California boogie”.  AMEN and praise the lord for people such as Chris Robinson who make albums for those of us out there who still enjoy the complete listening and visual experience that only an album can deliver.

For fans of: Real music, Chris Robinson and The Black Crowes