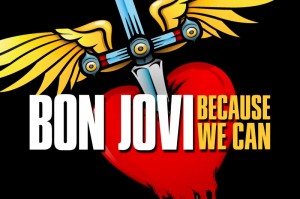 The best just got bigger. Bringing their signature brand of rock ‘n’ roll back to the people, Bon Jovi will hit the road in 2013 to fill stadiums and arenas worldwide with Bon Jovi Because We Can – The Tour.

Blazing a trail across the globe, the tour will kick off in North America in February, just in time for Valentine’s Day, and travel throughout Europe, the Far East, Africa, Latin America and Australia. The band’s return to the road in 2013 will cap an incredible run which has secured Bon Jovi’s status as the essential live rock band – having performed more than 2,700 concerts in over 50 countries for more than 35 million fans, and earning the #1 grossing worldwide tour twice in just three years.

Because We Can – The Tour will also debut brand new songs from new album What About Now, due out in Spring 2013, loading even more ammunition into the band’s huge arsenal of hits including “Livin’ on a Prayer,” “You Give Love a Bad Name,” “Who Says You Can’t Go Home,” “It’s My Life,” and many more.

Dates announced for Canada so far, keep an eye on www.bonjovi.com for all the details.