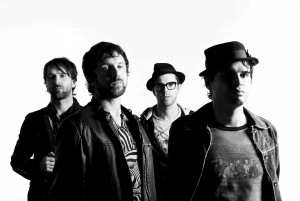 ‘The rock gods have again answered the prayers of rock fans Australia wide by blessing us with another tour from multi-award winning Canadian rockers, The Trews’ – Troy Culpan, May The Rock Be With You

This October THE TREWS will be gracing our shores for a national tour in support of their highly anticipated new extended EP, “…thank you and I’m sorry “. Released on 22 October 2012, the eight track extended EP features the lead single, an incredible re-imagining of Paul Kelly’s ‘Leaps & Bounds’ and a kick-ass version of their track ‘Poor Ol’ Broken Hearted Me’ featuring a gritty vocal contribution from their good mate Shannon Noll.

The tourcommences in Cronulla at legendary venue The Brass Monkey, where The Trews have played many a smokin’ gig, traverses parts of NSW, into Victoria, across to Adelaide and then winding up with a Melbourne Cup Eve gig, 5th November at Melbourne’s Hallam Hotel, with the aforementioned Noll.

Having performed 900+ shows, THE TREWS have proven their dedication to rock ‘n’ roll, supporting the likes of The Rolling Stones, Kid Rock, Guns ‘n’ Roses, KISS, Bruce Springsteen and Robert Plant. If that wasn’t enough to whet your appetite, critics have described the band as  “… without a doubt, the greatest rock band of their generation” – Performer Magazine (USA).

Since October 2011 they have managed to build a solid fan base with 150 shows across the U.S, the U.K and Australia. THE TREWS have achieved a staggering 13 top ten singles in the Canadian charts including two number 1’s, with a massive 12 weeks inside the TOP 10 on the Canadian ACTIVE ROCK chart for “Misery Loves Company”. THE TREWS won an Independent Music Award (US) for “Hold Me In Your Arms”(released April 2011) and took out first prize in AAA/ALTERNATIVE Best Hard/Rock/Metal Song at IAMA (International Acoustic Music Awards) 2010 for “Sing Your Heart Out”.

They secured #1 Album of the Year 2011 on Metal Odyssey for “Hope and Ruin” and Classic Rock Magazine’s Top Songs 2011 (UK) for “The World I Know”. Their most notable nominations to date include Best New Band by Classic Rock Magazine (UK), Best New Band by SPIN.com (U.S) and Juno Award nomination for the highly successful live acoustic CD/DVD Friends & Total Strangers.

Whether you’ve seen the THE TREWS before or you have been hanging out to see an all-round great rock gig, make sure you don’t miss these shows!

Tickets for “…thank you and I’m sorry “ tour, presented by Tone Deaf, are on sale now.

THE TREWS “…thank you and I’m sorry “ extended EP released 22nd October via itunes, and 2nd November in physical format, on Bumstead/Code One/MGM.

Presented by Tone Deaf – tickets on sale now via www.thetrews.oztix.com.au

Don’t miss out on THE TREWS Pre-Sale Bundle Tickets which include: