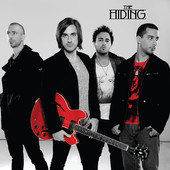 Following hot on the heels of their EP release earlier this year, Melbourne four piece The Hiding return with a two track single/EP titled Lonely Diaries.  The bands first EP delivered an anthemic, textured style of pop rock and for fans of The Hiding, as I certainly am, you will be pleased to know that style hasn’t changed.  Lantern Lights with tinges of electro pop and it’s whimsical instrumentation and melody is a track that will seep into your senses, rather than hit you right between the eyes.  That in essence really is the identifying spirit of The Hiding’s sound – atmosphere, space and texture.  Hopeless Heart delivers more of a rock edge and instant chorus and appeals as the likely lead single from this EP, but hey, that’s just my opinion!  The Hiding are headed off to the USA in October for some showcase performances, where they have made previous inroads with touring and airplay.  Lonely Diaries is only bound to further propel The Hiding out of “hiding” here in Australia, where the style of lyrically sincere pop rock they are increasingly perfecting, is somewhat under- appreciated.

Read the review of The Hiding first EP right here….