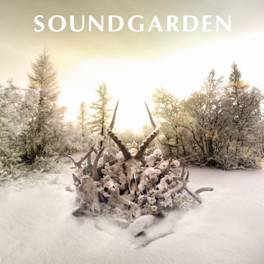 Seattle’s Soundgarden will release King Animal on November 12th 2012, the band’s first new studio album in over 15 years. King Animal will be released on Vertigo Records, an imprint of the UK’s Mercury Music Group, home to Metallica, Black Sabbath and The Killers. The album’s first single, “Been Away Too Long” will be available via digital retailers on September 27th. The band co-produced their sixth studio album with longtime Soundgarden friend and producer Adam Kasper (Foo Fighters, Nirvana, Pearl Jam) and recorded at Studio X in Seattle. King Animal was mixed by Joe Barresi (The Melvins, Queens of the Stone Age, Weezer) in Pasadena, California.

With two GRAMMY ® award wins, seven overall nominations and over 21 million records sold worldwide, Soundgarden redefined rock music for a whole generation and had a revolutionary impact on the course of musical history. At the dawn of 2010, the band, Chris Cornell, Matt Cameron, Kim Thayil and Ben Shepherd, announced a new beginning. In the last three years since Soundgarden has reunited, they released their first retrospective, Telephantasm, which was certified platinum, their first live album, Live on I-5, penned the end title song, “Live to Rise,” for the feature film The Avengers which went to No.1 on Modern and Active Rock radio, and headlined sold-out shows and festivals around the world including Hard Rock Calling at Hyde Park, London in July. Now, comes the band’s first collection of new songs since the 1990’s.

The writing and recording of the album was a true collaborative effort. Riotous album opener and first single “Been Away Too Long” finds Soundgarden back at it with a double-edged blast of homecoming celebration and urban angst. King Animal can be explosive, as in “Blood On The Valley Floor,” nightmarish (“Worse Dreams”) or wistful (“Halfway There”), leading us through changing sonic landscapes that can embrace both the jazz inflections of “Black Saturday” and the feral rocker “Attrition,” with compelling lyrics by bassist Ben Shepherd. The subject matter is broad – Kim Thayil’s lyrics for “Non-State Actor” are a sharp and cynical take on the powers behind political thrones, while Cornell’s bruised and introspective “Bones of Birds” explores the terrors and vulnerabilities of parenthood.

Soundgarden remain a truly ‘alternative’ band as they embark on the next chapter of their journey, steadfast in their roots with 15 years of growth behind them. King Animal follows the musical evolution of one of the world’s most groundbreaking bands. As BBC put it, they are “a band beyond lazy labels and genre limits.” This is a long awaited return for both the band and fans alike.