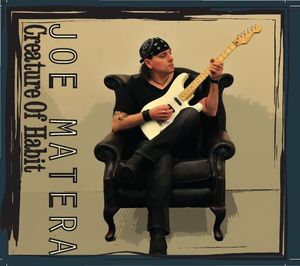 For the majority of rock music fans here in Australia, at some point over the last decade or so, you are bound to have heard, read, or seen Joe Matera?  As lead guitarist – with Aussie rockers Geisha during their re-emergence during 2007 to 2010 or as founding member of classic rock band Double Vision between 2003 to 2008.  As a highly respected music journalist since 1999, Joe has had over 900 articles published in magazines all over the world ranging from Metal Hammer, Classic Rock, Australian Guitar, Total Guitar, Performing Musician, Guitar & Bass…the list goes on!

Having previously featured Joe on these pages, this time around Joe has recently released his new album Creature Of Habit, which follows on from last years EP release Slave To The Fingers. The Angels’ Rick Brewster and Smokie’s Mick McConnell return once again to offer up some guest guitar wizardry, along with Fred Mascherino (Taking Back Sunday, The Color Fred, Terrible Things).

Days away from heading off for a series of shows in Europe and the UK, Joe checked in with May The Rock Be With You to chat about the new album.

Hey Joe, thanks for taking the time to do this interview.  Congratulations on your new album ‘Creature Of Habit’ which certainly builds upon your previous release ‘Slave To The Fingers’.  Generally speaking, how have you found the response to your style of melodic instrumental guitar rock?
Thank you Scott. The response has been great, particularly over in Europe. I have found that Europeans are a lot more open to instrumental music than we are here in Australia. My fan base and interest in my music continues to grow steadily over there.

I always love to find out the meaning behind the choice of an album title…so ‘Creature Of Habit’, what does that represent?
The title actually came from my wife Liz. She happened to mention to me one day that I like certain rituals in my day to day existence, like I have particular habits that are part and parcel of who I am, so I thought it was a great title and also, as she pointed out to me, it really summed up a lot about who I am.

How did the song writing take place for this album, was that something significantly different to the approach you may have taken in the past?
In some ways it was different. Generally I am always writing new music. When I am noodling around on the guitar, I might come across a cool riff or idea so I will work it. Most of the time I will write a chord progression first and usually will refine that until I have a whole song structured. From there, a melody will usually come from it and then it’s just a matter of constant refining to get it how I want it. The first song I wrote for this release was Slide. I wrote that around Christmas time last year. Then over the ensuing months I continued to write and record demos until I had enough material I thought would be appropriate for a new album.

We’ve picked out a few tracks from the album, can you give us your comments and thoughts on these songs:
No Way! – I wrote this track as a sort of a personal tribute to one of Australia’s greatest bands, The Angels. I am very much fond of their late 70s and early 80s material, the classic period so to speak, as I grew up on that sort of musical diet as a teenager. I came up with this chordal riff that very much felt like something you’d hear on one of those albums, so from that initial idea, it inspired me to write the rest of the track. Then after Rick Brewster had expressed interest in doing another guest solo on another track of mine, it was a no brainer to get Rick to lend his brilliance to the track.

Brave New World – I was thinking of writing a song that was epic in scope, a sort of Hells Bells meets Space Odsessy 2001. So once I got the main guitar parts done, I added a subtle synth to the track to give this kind of vibe and feel and with Tony Dolan’s monstrous bass line, I finally got what I had in mind.

The Seeker –  People seem to really love a lot of my acoustic stuff particularly Travellin’ West, so thought that though this album was all electric, I would throw in an acoustic track to help balance the material. I originally wrote and demoed this as shorter piece but when it came to recording it, I felt it didn’t really say enough musically so wrote a new bridge and extended the track, then awoke one morning, with an idea in my head to add an orchestral element to it which is where the intro section came into play. I asked a multi-instrumentalist friend János Krusenbaum in Germany to play some piano and add some orchestral elements.

The track Fallen Angel mixes things up a bit with you adding lead vocals into the mix.  Tell us a little of your background as a vocalist and what and who are your greatest influences when it comes to shaping you as a vocalist?
Since I started playing in bands over 25 years ago, I’ve always sung a song or two, but singing as a front person has never been my main forte. I am more comfortable onstage as a guitarist so shy away a lot from being a lead vocalist. My wife and others, who have heard me sing over years, have always encouraged me that I should be singing more. And over the years I have written and recorded a handful of songs that I wrote lyrics and music for and sung on the demos, but kept them locked away in my vault. My plan was to get someone else to sing Fallen Angel but I found out, it didn’t really capture the essence and feel of the song. Then I figured many other instrumental artists like Joe Satriani have included vocal tracks on their albums, and thought this would be the perfect opportunity to introduce my vocals to my audience. And decided to go ahead and record the track a new with my lead vocals and harmony vocals. It is a big step for me and new territory but the response so far has been overwhelmingly positive and encouraging. So it looks like something I may do more of in the future to compliment my instrumental outing. Most of my influences are guitarists, but when it comes to vocal influences, Bryan Adams would be up there as one of them.

When you think back to the recording sessions for ‘Creature Of Habit’, what are 3 thoughts/memories that most immediately come to mind?
1)    The lead guitar on Endless Summer was done in one take. It was one of those spontaneous moments that when it happens in the studio, you hope that it’s being captured. And in my case, it was.

2)    Hearing each of the guest soloists contributions for the first time.

3)    Struggling with trying to finish one of the tracks after labouring for months on it, constantly refining it as I wasn’t happy with the melody. Then waking up with a much better melody in head, recording that one and finally finishing the track..

You had a few guests lend their talents to this album, such as Rick Brewster (The Angels) and Mick McConnell (Smokie) who appeared on your previous EP, however specifically I was suprised to learn of Fred Mascherino’s (Taking Back Sunday, Terrible Things, The Color Fred) appearance, can you tell me about how that association came about?
Yes it was great to have Mick and Rick return.  Mick plays an outstanding solo on Outland, a perfect fit for what the track needed.  As for Fred, I’ve known Fred for a number of years now. I first met and befriended him when I interviewed him during one of Taking Back Sunday’s tours of Australia.  Over the years each time the band came to town, I would hook up for a chat.  Eventually Fred quit the band to pursue his The Color Fred and current Terrible Things project.  Then when I released Face Off, Fred sent me an email saying he loved the track and wanted to hear more which he did when I released Slave To The Fingers. The last time I caught up with him, The Terrible Things were in town playing a show, he again told me how much he enjoyed my tracks, so I asked him if he was interested in doing a solo on a new track I was working, and he was up for it.  I feel honored to have Fred on my track, his solo is pure six string brilliance, an inspiring pièce de résistance.

Did you allow yourself the opportunity to try anything new as far as the way you went about recording the guitar tracks on Creature Of Habit, such as new equipment, or different recording approach or production style?
I wanted to move forward with my musical ideas and try out some new sonic ideas on this album.  Rather than stick to the normal guitar/bass/drums format only, this time around I’ve experimented with orchestral elements, some synths and also some mixing ideas that James Strickler (drummer, co-producer and mixer) and I experimented with. This is evident on the two versions of Outland I recorded for the album, where each has its own sonic blueprint.

You have some international appearances coming up later this month in Europe and the UK which you must be pretty pumped for!  For those who will be going along to check you out, what have you got in store for them as far as material you will be playing, not to mention who else you will have forming the Joe Matera band?
The live shows in the UK are being billed as Davenport/Matera. I will be performing all the material off Slave To The Fingers as well as a few tracks off Creature of Habit including for the first time live, Fallen Angel. We will also be performing a number of Rich Davenport originals whose songs are great and really fit in with the melodic rock vibe of the show.  The band I’ve got playing with me are really great guys and top notch musicians: they are comprised of, as mentioned earlier, my English friend Rich Davenport who will be on rhythm guitar for all my original instrumental material. (He will switch to lead guitar and lead vocals when we perform his original material during the set whereas I’ll move to rhythm guitar) and on drums there is David Nuttall and on bass there is Geoff Walker.

Here’s a chance to gaze into your crystal ball, over the next 12 months, Joe Matera will have:
1. Toured Europe and performed some Australian shows.
2.  Be working on album number two.
3.  Have had a number of my tracks picked up for inclusions onto film soundtracks.