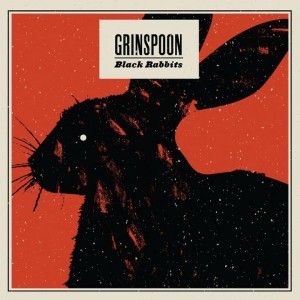 In summary – “If you think you know Grinspoon, you probably don’t. This new album is fresh, it’s rockin’ and it’s relevant.”

When you’ve been a band for seventeen years, it must be tough to keep yourself motivated, to come up with something fresh, yes many bands go through the ‘what do I want to be today?’ phase, but Australian rock band Grinspoon have not only done that but done it so very, very well with this, their seventh album ‘Black Rabbits’ read on…

‘Passerby’ was the first taste of what we could expect from the new work of Grinspoon. A fresh, melodic style track that to me showed a new maturity, a great vibe and a kick ass hook. If this is what we can expect from the rest of the album then sign me up for the fan club, I’m in.  ‘Final Reward’ is catchy and asks “What have we learned?” I’d be saying a lot so far… ‘Beaujolais’ will have you “whoa ohing” and “yeah ehing” in no time, and musically this one is great, different parts and great tone. Although the winner on the album for me comes in at track four, ‘Branded’ which hits a groove musically from the first note and grabs the ball and just runs with it, there’s just something about the progression used in this song that gets you, along with the underlying guitar parts and lyrically “so let them listen, so let them gather round” should be the theme of this album, this for me will be hard to top. In fact, make this a single guys, show the world how it’s done. If this was released by a band like The Killers it would be a smash, so you do it instead. Sorry, this song excites me…

‘Carry On’ slows it down just a little with some great lyrics and feel, ‘Just a Sound’ brings in some clean guitars balanced with the buzzed up rockin tone throughout the chorus and solo, oh yes, a guitar solo. Take THAT modern music; some bands still love a guitar solo. ‘Emergency’ riffs it up from the start and to me this one feels like a little bit of the Grinspoon of old, but this is a Grinspoon a few years older, this one rocks and I can see this as a show opener, this will blow the roof off when played live. On that, Grinspoon are one of those bands you should check out live, at least three times, with this new material I for one can’t wait to hear it from the crowd, guess first chance will be in January at the Big Day Out…

‘Full Moon’ here’s my other favourite on the album, there’s just something about this track, you need to really listen to it to hear all the little parts, the layers of guitars, bass riffs, then the chorus itself is just one big hook, you know like in the olden days when bad acts were pulled off stage with a giant hook, yeah, that, the hook not the bad act, as this is far from bad. This really is a stand out for me, to then follow it with ‘Casualty’ worked perfectly, another song that has that older Grinspoon feel, not sure if it’s the bass or progression musically but I’m loving it, even more so as it belts in to the huge bridge and chorus, fuck me this one is done well, as it balances the verses and chorus perfectly.

“Cigarettes and alcohol have made me numb…” I love this line from ‘Another Sun’ where the guys slow the tempo down, although this one took a couple of listens for me but now I’m all over it. ‘Tightrope’ starts in almost an Angels type riff, a great throwback style for mine, this is a big rocker, another that will ‘go off’ live. ‘Raise Your Glass’ isn’t a cover, but instead a happy little ditty, once again musically the guys have done well here and that reminds me, I haven’t really mentioned the production yet but now I will. Listening to this album there are so many parts in some songs yet it’s never muddy, never over the top and never too much. I guess the perfect word for it is balanced, props or Dave Schiffman and The Grinners for what they’ve created here. The album ends with ‘Battleground’ a complete musical onslaught and by far the heaviest and fastest track on the album, what a way to finish, instead of a throwaway track which many have done before, Grinspoon cross the line with two minutes of intense fury. Love it.

Overall, this is a damn good album and my call for my favourite album to come out of Australia for the year and the best 44 minutes and 40 seconds I’ve spent by myself for a long time. I hope a lot of people check this out as if you think you know Grinspoon, you probably don’t. This new album is fresh, it’s rockin’ and it’s relevant. Now, about that fan club…