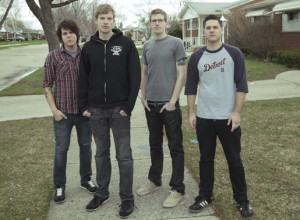 Blue-collar, punk rock has seen a rise to prominence in recent years and at the forefront is Flint, Michigan’s The Swellers. And now, the quartet are set to return to Australia for the second time this October, coinciding with the 10 year anniversary of the band’s existence.

Over the last decade, The Swellers have taken their hard-edged, yet accessible style of punk to the world stage. The last four of these years have been spent touring non-stop with the likes of Less Than Jake, Set Your Goals, Four Year Strong and A Wilhelm Scream. This touring followed on the back of 2011’s album Good For Me, the third for the band. The diverse sounds on the album have seen them fit onto mixed bills all over the world, including a place on the Counter Revolution tour that saw the band head to Australia for the very first time.

While The Swellers started 2012 by leaving former label Fueled By Ramen, the year sees the band continue to grow both both in terms of their skills as musicians and in their fanbase. Having already released the Vehicle City Blues 7-inch in May through SideOneDummy Records, the 7” sold out before its release. The band are now returning to Australia for a national headlining tour.

The tour comes on the back of the release of an EP of brand new music. Alternative Press quoted frontman Nick Diener as saying, “It’s five songs that we wrote in our basement and it’s, like, the first time in a long time that we’ve been free and able to do what we want to do. We’re not thinking about it too hard, and we’re doing it exactly the way we would have 10 years ago when we started the band. [These songs] come from such a special place—just jamming in the basement with my brother again. It’s just like it used to be.”

Joining The Swellers on the road will be Sydney hardcore act Endless Heights. From day one, Endless Heights have had a clear vision of what their band is about: to keep striving and working towards your dreams. This is articulated clearest on their most recent release, the EP Dream Strong, and in a touring career that has seen them join the stage with Title Fight, Defeater, Break Even, Miles Away, Have Heart and most recently touring Australia with Basement. Endless Heights are currently in pre-production for a new release due in the coming months.

No line up in 2012 is going to bring as heartfelt, honest and melodic punk rock as the pairing of The Swellers and Endless Heights. Watch them join forces for nine stellar shows across the country this October.

Saturday, 13 October 12 Bang, Melbourne 18+
Tickets at the door only

Saturday, 20 October 12 Thriller, Brisbane 18+
Tickets at the door only