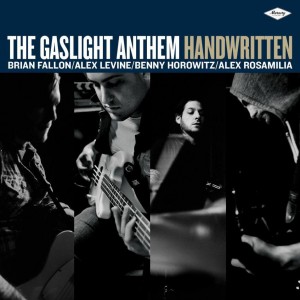 In Summary: “If more bands could make albums of this calibre then the charts and the world would be in a much better place.”

Already loving the previous works of The Gaslight Anthem, I was excited when this record was coming and finally released. This is the bands fourth effort and as you’ll read below, in my opinion by far their most amazing to date.

First single “45” is the perfect opener to the album, with its infectious hook and sing along chorus, you honestly just get the feeling you’re in for something special. Then it’s the title track ‘Handwritten’ which is just outstanding in my books, lyrically so well pieced together and produced perfectly, it’s a song that is hard to fault, and is without doubt in my top 5 songs for the year. Let’s see of anymore from this album make that list. Stay tuned.

In all honesty this review will go on forever if I go in depth about each song, so instead of me gushing over them all (I’ll mention some), what I will say is when you can have 11 completely different songs on a release, and in my opinion each as good as the other then you’re onto a sure bet. There’s somewhat of a formula that The Gaslight Anthem have found and I’m glad they have, this is a pleasure to listen to, well, put it this way, since its release I’ve played this album through start to finish 26 times. So that’s gotta be somewhat of indicator of how much I dig it. There’s just something soothing, friendly and accommodating about the vocals of Brian Fallon that assists with the phonographic experience of listening to ‘Handwritten’. Actually on that, I need to own this album on vinyl, that would be superb, must get on that.

‘Mulholland Drive’ is spectacular. I actually felt every word being sung, too good. Whether it’s the phrasing or just sheer genius of the arrangement of the song, or the build and the delivery of “Did you miss me when I was gone, and the simple things we used to rely on?” late in the song which was just perfect it made it a stand out indeed. It’s really the driving guitars and blistering melodies just balance this record amazingly. Take ‘Howl’ for instance, at just over 2 minutes it is a powerhouse of a track and while you’re loving every second of it, it ends with you wanting more, yet loving what you just heard. Well played.  Now I’m a big fan of a ‘whoa oh’ or a ‘yeah eh’ and they do feature somewhat thought a few of these tracks, ‘Desire’ being one of them, but the underlying guitar throughout the track here is what makes it for me, the tone is amazing making it all fit and complete the puzzle. To balance we get the thumping drum intro and beat of ‘Mae’ which stays true throughout the song, it is a perfect middle of the road rocker that brings you in.

Ok, so my favourite track on the album and another addition to my top 5 of the year, and the album closer is ‘National Anthem’, this in my opinion is one of the most perfectly written songs ever. Maybe as some of it struck such a chord with me, but regardless of my story it’s just amazing when it can be heard this way, this is a simple vocal, guitar and strings used to deliver it. This song was a pleasure to listen to. I adore it. Yep. If I could I’d actually marry this song. Perfect. I guess it just hit me right.  Isn’t that what music is supposed to do? “Whatever gets you through the night…”

To say I’ve been blown away by how good this record is an understatement. If more bands could make albums of this calibre then the charts and the world would be in a much better place much like Wyld Stallyns do in the future. I recommend this album to everyone. Yep, all of you. Spin it, you will love it. If you don’t, then spin it again as you were obviously listening to it wrong.  But seriously, have a listen and make up your own mind, but definitely at least give it a listen. A definite contender for my Album of the year, hands down.

For fans of: Rock – Punk – Alternative