The Beards – 2012 End Of The World (for beardless people) Tour 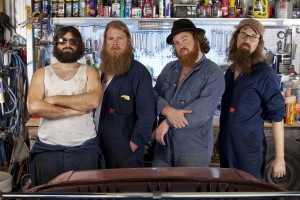 The Beards: The 2012 End of The World (for beardless people) Tour

By now, everyone has heard about the various ancient prophecies predicting some sort of apocalypse at the end of this year. There’s the Mayan prophesies, the Incan and Egyptian prophesies, the prophesies of Nostradamus, as well as a host of prophesies from the people on the Internet. Every single one of these prophesies, if misinterpreted correctly, forecasts that this year could mark the end of the world as we know it. But there’s one prophecy that’s still relatively obscure, and it predicts that on December 21st, 2012, the world will end – for people without beards.

This three age-old foretelling has prompted the world’s most beard-related theme band to spring into action. From September 28th, The Beards will embark upon their biggest Australian tour to date, in an attempt to convince as many cleanchins as possible to repent before it’s too late.

“We told you to grow beards,” said The Beards’ front man Johann Beardraven.

“This will be your last chance.”

The tour will coincide with the launch of The Beards’ new film clip for the song Got Me a Beard, from the album Having a Beard is the New Not Having a Beard.

Catch The Beards at the following venues:

The Beards: The 2012 End of The World (for beardless people) Tour