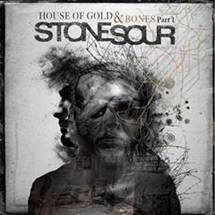 Grammy-nominated rockers Stone Sour will release the first installment of their double album House of Gold & Bones Part 1 on Roadrunner Records on October 19, 2012. The second installment will be released in 2013. The album was recorded at Sound Farm Studios just outside of the band’s native Des Moines, Iowa with producer David Bottrill (Tool, Muse, Staind) at the helm.

The band is sharing the first two tracks from Part 1, titled “Gone Sovereign” and “Absolute Zero,” at www.houseofgoldandbones.com. Both tracks embody and encompass everything that Stone Sour is: a forward-thinking rock band that is able to mesh maelstrom with melody, brains with brawn and the head with the heart.

Guitarist Josh Rand states, “House of Gold & Bones takes everything that’s great about this band and amplifies it. The riffs, the lyrics, the grooves and the songs are like Stone Sour times 10. There’s also heavy stuff that’s like nothing we’ve ever done before. It’s dark as hell and a complete experience from the first track to the last.”

Singer, songwriter and lyricist Corey Taylor, himself a bestselling author courtesy of last year’s Seven Deadly Sins, wrote the lyrics for the 24 tracks that make up House of Gold & Bones as a linear storyline. It tells the compelling tale of a character created by Taylor. The release of the first two tracks from Part 1 is the first step in unveiling a journey which has only just begun and will continue over the next year.  Music is just one of the media the band uses to tell the story.

Stone Sour have also confirmed the first leg of a massive global tour push to support House of Gold & Bones, playing shows on five continents, with many more to come.  Says Taylor, “It’s going to be awesome to bring the House of Gold & Bones to the fans live. We’re all psyched to come to Japan and South America right away as well; they’re some of the best fans in the world! We gave people a taste of Part 1, now we’re going to bring them the best Stone Sour show they’ve ever seen. Get ready: It begins soon…”

More information about House of Gold & Bones will be revealed as the project unfolds.  The track listing for Part 1 is below.