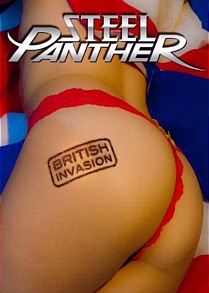 The Australian and New Zealand release of the forthcoming Steel Panther DVD ‘British Invasion’ is imminent, with the official date for release being September 28th, with release dates for the rest of the world still to be announced.

Shot at a sold-out show in London’s famed Brixton Academy, Steel Panther brings back the 80’s in full force with a blistering set of their greatest hits. This DVD includes such favorite songs as “Asian Hooker”, “Death To All But Metal” and “Community Property”. Also includes a hysterical behind the scenes documentary that is a must see! Total running time is over 2 hours and stars : Michael Starr, Stix Zadinia, Satchel, Lexxi Foxx.

Steel Panther are set to hit Australia in October for a headline tour presented by Soundwave Touring, but if you don’t have tickets, then you better get in quick….

Pre order the DVD via this link at JB Hi Fi online http://www.jbhifionline.com.au/672646