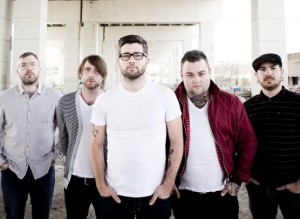 Alexisonfire has always taken pride in keeping promises to fans. Exactly one year after the members of Alexisonfire announced they were going their separate ways, the band has announced a 10th Anniversary Farewell Tour.  Spanning the month of December 2012, beginning in London UK and ending in Toronto ON, the tour touches down on four continents in 24 days, including their first and only performance in South America. Australian fans will have two chances to see Alexisonfire when they play Sydney’s Hordern Pavilion on Tuesday 11 December and Melbourne’s Festival Hall on Wednesday 12 December.

Alexisonfire will be hosting a PRESALE for the tour, with a limited number of VIP ticket bundles available for each show that include a Meet & Greet with the band, and other limited items. The PRESALE for Australian fans will begin 2pm AEST Tuesday 14 August and conclude at 2pm AEST Thursday 16 August, with tickets going on-sale to the general public the following Friday 17 August, 9am AEST. Fans should keep an eye on the band’s website and social media for more information.

The band is working on a discography, vinyl box set which will include 12” LPs of each studio release and out of print 7” EPs including, but not limited to, Math Sheet Demos, Crisis b-sides, Insulation Tapes, BBC Sessions. The box set will also feature a photo booklet and other exclusive items. More information will be released in the upcoming weeks.

“I think that there was a lot of doom and gloom surrounding the last Alexisonfire tour. Now that the dust has settled, and everyone has gone down their separate paths, I think it’s important to get proper closure on 10 years and share it with the our fans. After this we can leave Alexis in our rear view and remember it fondly, not as something we had to escape.” – George Pettit