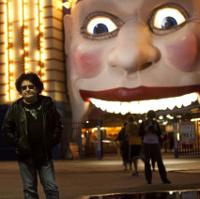 Richard Clapton is one of Australia’s most loved and enduring songwriters. “Harlequin Nights“, his first album in eight years, celebrates the beginning of his fifth decade in the music industry.

Featuring everything from 6 ½ minute musical epic “Vapour Trails” through to folk classic “Run Like a River” and a fellow party boy’s nod at Charlie Sheen in rocking first single “Dancing with the Vampires“, “Harlequin Nights” shows an songwriter at a new artistic peak, as relevant today as he was recording his first album in 1973.

While “Girls on the Avenue” was his breakthrough pop radio hit in the mid-seventies his songs about Australian culture and politics have etched a deeper and more enduring legacy, providing songs that have become part of Australia’s culture. “Down In The Lucky Country“, “I Am An Island“, “Best Years Of Our Lives“, “Capricorn Dancer“, “Glory Road“, “Blue Bay Blues” and many more of his folk and rock influenced songs make up his strong and lasting set as he continues to perform to hundreds of thousands across Australia every year.

The album is released as Clapton gears up for his fifth annual sell-out concert at Sydney’s State Theatre which this year is a nod to his seminal 1977 album “Goodbye Tiger“.

During “Harlequin Nights” long gestation period, Clapton has endured a marriage breakdown, taking him on a personal journey which influenced his continuing musical evolution, culminating with a new songwriting partnership with guitarist Danny Spencer.

“The wife moved out which as anyone who’s been through it will attest isn’t an easy time in life, but creatively it’s been one of the most productive with Danny helping me write some of the best songs I have put my mind to for many years,” Clapton said.

Richard Clapton has never been rich. He has never had the pleasure of passing through life in a luxurious rock star bubble. In a career that now spans over 40 years he has battled everything from bad managers and capricious record companies to drugs, debt, taxes, personal tragedy and a thousand room service dinners. The fact that he’s come through it all with his sanity – and his abilities – surprises all who know and love him. But survive he has, with a tale to tell.