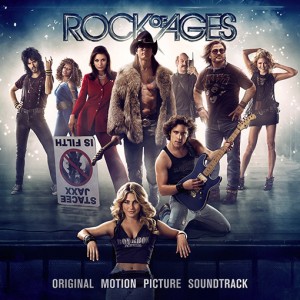 “Taking classic, beloved rock anthems and seeing them through the unique perspective of the characters in the film was such an exciting prospect for me in directing Rock of Ages,” said filmmaker Adam Shankman. “We had a phenomenal cast who performed these songs in such a powerful way—adding depth and meaningful imagery to the film. I was lucky to have a partner in Adam Anders who, better than anyone working today, understands how to take popular songs and seamlessly repurpose them to tell a story with unparalleled originality and success.”

“It’s an enormous thrill to introduce the soundtrack of Rock of Ages to the world,” said Executive Music Producer Adam Anders. “While re-imagining these songs for the film, it was important for me to present them in a way that would not only tell the story, but transcend generations by making these songs relevant for today’s audience. This soundtrack truly captures the incredible performances of a very talented cast who brilliantly reinterpreted these songs with us in the spirit of the film. I am really proud of this soundtrack as it is definitely one of the highlights of my career.”

As the larger-than-life, arena-rocking champ “Stacee Jaxx,” the Rock of Ages Soundtrack features Tom Cruise belting out Bon Jovi’s classic “Wanted Dead or Alive,” Def Leppard’s hit “Pour Some Sugar On Me,” and Guns ‘N Roses anthem “Paradise City.” Cruise also duets with Malin Akerman on Foreigner’s power ballad, “I Want To Know What Love Is,” and shares the mic with Julianne Hough on The Scorpions’ “Rock You Like A Hurricane.”

Also echoing through the soundtrack are mash-ups of songs that ruled the airwaves in the `80s, including Foreigner’s “Juke Box Hero” / Joan Jett’s “I Love Rock N Roll”; Extreme’s “More Than Words” / Warrant’s “Heaven”; Pat Benatar’s “Shadows Of The Night” / Quarterflash’s “Harden My Heart”; and Starship’s “We Built This City” woven into Twisted Sister’s “We’re Not Gonna Take It,” all performed by the film’s cast.

The full track list for the album is as follows:

To learn more about the film and soundtrack visit www.rockofagesmovie.com