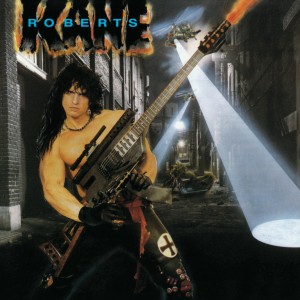 “Delivers everything you would expect from an album featuring a Rambo like guitarist with a machine gun guitar.  There’s loads of gargantuan guitar work, some massive fist pumping anthems”

Kane Roberts – for some he may be best known as probably one of the most identifiable members of Alice Cooper’s band, the hulk like guitarist with an arsenal of machine gun guitars during Alice’s mid 80’s Raise Your Fist And Yell and Constrictor era.  Co writing the majority of the songs with Alice on these albums, this era saw Alice turn into a more heavy metal oriented direction.  For others, their first introduction to Kane Roberts may have been as a solo performer through his 1991 USA hit single Does Anybody Really Fall In Love Anymore off of his killer second album, Saints And Sinners.  Co-writing with Desmond Child, the album is full of massive melodic rock songs that feature some of the biggest gang vocals this side of Mutt Lange.

However as a solo performer, it all started with this, Kane’s self titled album that was initially released in 1987, however has now been reissued and digitially remastered here in 2012 by German label Yesterrock.  Far more muscular (pardon the pun) and metallic than Saints and Sinners, this album delivers everything you would expect from an album featuring a Rambo like guitarist with a machine gun guitar.  There’s loads of gargantuan guitar work, some massive fist pumping anthems, and it’s drenched in true 80’s hard rock stylings.  Songs such as Rock Doll, Triple X, Outlaw, Full Pull and Out For Blood, deliver everything you would expect from song titles such as those, it’s all about over the top rock excess with these tracks.  Don’t believe me, well check out the video clip for Rock Doll below!

But revisiting the album again here in 2012, the true treasures of this album lie in the more melodic, keyboard saturated tracks.  Too Much (For Anyone To Touch) comes across like a Rick Springfield or even Michael Bolton (circa mid 80’s) track.  A Strong Arm, Needs A Stronger Heart which Roberts penned with Kip Winger and mixer/producer Michael Wagener is one of the albums best tracks, buried right at the end.  Whilst If This Is Heaven slays me with it’s pre-chorus, but I’ll happily take the massive gang vocals of the chorus as well, I mean I can never, ever resist those.

Whilst Saints and Sinners is THE essential album as far as Kane Roberts goes, sitting somewhere in between that album and his work with Alice Cooper, this self titled release really is still a great listen all these years later, particularly in it’s 2012 digitally remastered format. Speaking of Saints and Sinners that album has a similar reissue on the horizon, with an additional EP of previously unreleased songs recorded at various times before and after the Saints sessions, so stay tuned….

Check out our 2011 interview with Kane Roberts right here…

For fans of: Kane Roberts and fun 80’s hard rock