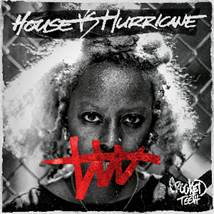 As House Vs Hurricane gear up for the release of their long awaited sophomore album Crooked Teeth and its subsequent capital cities run, the band today release a brand new iPhone app, as well as details of the album package and a massive run of regional tour dates.

It has been confirmed that the first pressing of the album will include a free DVD that features studio diaries, interviews and the Blood Knuckles music video. The package will be a six panel softpak with a huge booklet.

The band have also just released a free iPhone App. From the 29th June, the band will drip feed tracks from the album right up until release. The app has a bunch of bonus features such as a news feed, tour dates, videos, merchandise discounts and loads of other exclusive content.

Fans in regional areas will be stoked to hear that House Vs Hurricane are not just hitting capital cities this Winter. Immediately following the massive Crooked Teeth Tour, they will commence Crooked Teeth Part II, a regional run that will take in most of the East Coast.

Along for the ride will be Confession, playing their first shows since controversial front man Michael Crafter kicked out the other four members of his band earlier this year. The change made headlines across the country, including a hysterical interview on triple j’s Short Fast Loud where Crafter held back on no detail about the events that transpired.

Rounding out the national line-up will be Byron Bay’s In Hearts Wake, who are getting ready to release new music as we speak. This tour will be their first major run of 2012.

Crooked Teeth has already started getting the quality reviews you’d expect from a band as established as House Vs Hurricane. Blunt Magazine awarded it, Album Of The Month in the latest issue stating, “HVH 2012: different ingredients, less fat, better taste. Enjoy!”

Three songs from the album are now available online.  “Blood Knuckles“, “Get Wrecked” and most recently, “40 Deep“.

** In Hearts Wake Not Appearing

Tickets will be on sale next Tuesday 3rd July via housevshurricane.oztix.com.au