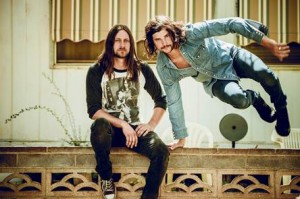 Known for their brutally energetic live sets it seems fitting that Jackson Firebird should mark such a momentous occasion with the Paper Scissors Rock tour in Victoria and NSW.   Previously, the band has earned their touring stripes alongside You Am I, King Cannons, Snowdroppers, Little Birdy and the Fumes. Two killer visits to Byron’s prestigious Bluesfest sealed their fans, while this month, the pair have ventured to the UK to tour, including a performance at the Great Escape.

“Clearly a well-gigged band, they made their manic and unpredictable tempo changes look effortless and sailed through a set of hyperactive twists and turns with apparent ease: slide-heavy swamp-rock one minute, almost psychedelic-rock soloing the next… They stole the show.” –  Craig Elliot – theupcoming.co.uk

Rugged, explosive, full-tilt Aussie rock & roll – Jackson Firebird (aka Dale Hudak and Brendan Harvey) have delivered one hell of a mighty wallop in the form of Cock Rockin’.  The album consists of ten killer tracks which perfectly capture the band’s no-holds-barred live show, recorded in Adelaide with engineer/producer Mick Wordley at Mixmasters studio. Laid down in various sessions over a 12 month period, for their debut Jackson Firebird had one aim: to capture their volatile live power on tape.  “Jackson Firebird is all about the live show,” insists Harvey. No frills, nothing fancy: just straight up, 12 bar lovin’ rock & roll.

“It was chaos distilled in a whisky bottle and poured all over the stage…” summed up The Brag in Nov 2011. Now it’s time to see for yourself. Hold on for the ride and turn it up loud: with Cock Rockin’, Jackson Firebird has landed.

With special guests River of Snakes

** River of Snakes not appearing